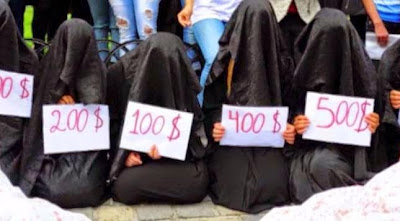 ISIS terrorists are picking out the “prettiest virgins” from the women they capture and sending them to their Syrian stronghold to be sex slaves, according to a UN expert.

Brave women who resist the murderous terrorists are subjected to horrific fate.

Zainab Bangura, the special representative of the UN secretary general on sexual violence, has spoken to women who have endured sexual violence at the hands of militants, particularly women of the Yazidi minority.

She spoke of how the terror group strips girls naked, conduct virginity tests, and send them to slave auctions after they have attacked their villages, often killing their husbands, fathers and brothers.

Fierce haggling usually breaks out at slave auctions, where the girls are sold naked,but Takfiri leaders are the first to choose, followed by emirs and finally the fighters, Bangura noted.Each purchaser usually takes three or four girls, keeps them for a couple of months, and then sells them off after getting tired of them, she added.

We heard of one girl who was traded 22 times and of a Takfiri leader who had written his name on the girl’s hand to show that she was his “property,” the UN envoy said.

Having found out that the girls were using headscarves to hang themselves, the Takfiri group banned them from wearing headscarves in some regions, the Sierra Leonean activist added.

During the interview, she also talked about a girl who had been burned alive after refusing to carry out extreme sexual acts.