How Mob hunted down, set ablaze 3 suspected robbers in Ogoja 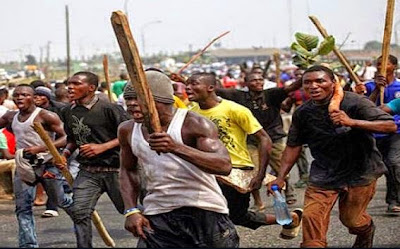 Three young men suspected to have robbed traders in the popular Okuku Market in Yala Local Government Area in the northern part of Cross River State were on Thursday afternoon set ablaze by a mob amidst the wailing of women who witnessed the gory scene.

The young men comprising two indigenes of the area and one from Ebonyi State were alleged to have waylaid the traders from Akwa Ibom State who throng the market every five days to buy food stuff at the markets motor park and robbed them of the money they came with to buy food stuff.

“Yesterday was Okuku market’s eve and many traders from Calabar (Akwa Ibom and Rivers) usually come here on the eve of the market so that they could buy yams and garri early before everything is bought by others, due the bad road and distance they usually sleep in the market park before the market day”.

Maria Ipuole, one of the eye witnesses told Vanguard.

She said at about 7 pm on Wednesday when the bus carrying the traders arrived the park, the boys armed with locally made pistols and machetes attacked the them and dispossessed them of their money and phones killing one of them in the process.

Maria said one of the robbers was an indigene of Okuku, the community where the robbery took place, another from Obubu and the third from Abakaliki in Ebonyi State.

One of the angry youth said the suspects were first inflicted with machete cuts before being set ablaze in a bonfire which he claimed is to serve as a deterrent to other youths who may harbour such evil intentions.

‘Okuku market is popular all over the country and if our young men are allowed to turn the place to a robbery haven, then the market will soon die”. He told our reporter.

A source at the Divisional Police Station in Okpoma under whose jurisdiction Okuku is under said before the police could arrive the market, the mob had already set the suspects ablaze.