I became blind after drinking ogogoro 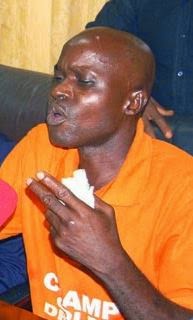 One of the survivors of the Ode-Irele methanol poisoning in Ibadan, Mr. Olorunwa Jero, yesterday, recounted his ordeal in the throes of death.

Jero, a father of six, who is a vulcaniser, narrated: “By the time I was brought here, I had gone blind. I could not identify my wife, I could not identify anything. I did not even know when I arrived here. “But I thank God and the management and staff of University College Hospital, UCH, for bailing me out. I can see all of you here clearly. I can even identify the clothes each one of you is putting on.”

The victim commended the teaching hospital for its timely medical intervention which he said saved his life. Meantime, UCH management, yesterday, confirmed that five victims of Ode-Irele methanol poisoning were responding to treatment. The victims were said to have taken the methanol while consuming a local gin. Confirming that the toxin was detected in the blood and urine of the victims, Professor Temitope Alonge, Chief Medical Director, UCH, said the five victims were transferred to the teaching hospital on April 18 adding that they had regained their lost sight as a result of taking the chemical.

Alonge, who said this while speaking with newsmen in Ibadan, warned people to be wary of taking local gin so as to avoid s similar unpleasant experience.

According to the CMD, series of tests were carried out on the victims and the samples of the three drinks they took.


The medical practitioner said: “On April 18, the Consultant Pathologist with the Ondo State Ministry of Health, Dr. Osasan, called to seek the assistance of the University College Hospital, Ibadan, in the management of five patients who survived the Ode-Irele neuro-toxicity saga who were completely blind.

’In addition, the clinical pharmacologists led by Professor Catherine Falade, the laboratory scientists and specialists advisers to the hospital, Professor Segun Ademowo, were all contacted for the biochemical analyses of the blood of these patients as well as the urine in addition to the three samples of local gin that was reportedly consumed by the patients. He added that all the relevant health personnel worked for almost two weeks before they detected the likely cause of the neurotoxicity exemplified by sudden blindness and correlated their findings with the toxicants in the blood, urine and the local gin samples.