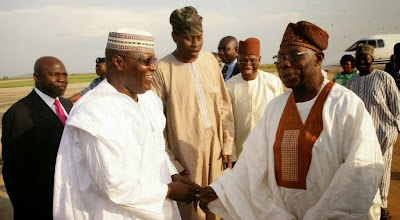 Former vice president under Olusegun Obasanjo's regime,Atiku Abubakar has addressed his problems with the ex-president.Excerpts from his interview with Punch

Your former boss, ex-President Olusegun Obasanjo, said so many not-too-complimentary things about you in his latest book, ‘My Watch’. Have you both met since then?

You know, really, I don’t give a damn (about) what Obasanjo says about me.
On if former President Obasanjo scuttled the best chance he ever had to lead this country as president?

On Obasanjo scuttling his political career

On contesting for president again

It is quite too early for such a question. We are in a transition process. We have not even formed the next government. You are asking me whether I will like to run again or not. I think it is just too early. My concern is to make sure that the transition process is smooth and complete and a new government is formed because it is the party that I belong to that is coming in. My dream for Nigeria is always that we can, from time to time, change government so that there can be competition among parties and that competition will bring about, perhaps more development and progress in the country. I think that is my most important concern now rather than thinking of whether I’m going to run again or not.

On meeting President Goodluck Jonathan before the general elections

I have told Nigerians what transpired between the two of us. He wanted me to come back to the PDP and I said I was not coming back.