I joined robbery because I am the first child [PHOTO] 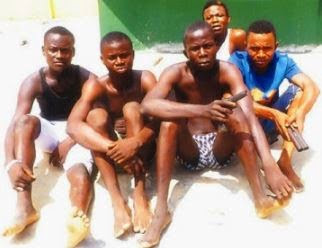 The police in Lagos have arrested five suspected members of a robbery gang which unleashed terror on residents of Ijanikin area on Sunday, May 24.

One of the robbery suspects, 25-year-old Ajayi Solomon, told PUNCH Metro that he went into armed robbery because his parents were late and he needed to take care of his siblings.

Solomon, who hails from Oto-Awori, Badagry, said the gang had planned the robbery while they drank and smoked at the Egun festival. He added that he had five siblings which he took care of with the proceeds of robbery.

“It was at the Egun festival in the Oto Awori area that we planned the operation. We drank and smoke hemp during the festival. At about 8pm, we left for the Ijanikin area. We were about 40 persons. We robbed till dawn.

“Some of the gang members entered shops, restaurants, and stores to loot property. But in the process, I was arrested by the police. It was about three weeks ago that I returned from prison. I started robbery two years ago. s

“I had no option because my parents are late and I am the first child. In 2010, I also joined a cult group in the area. I belong to the Eiye Confraternity. As a result of the death of my parents, I dropped out of school in Senior Secondary School Class 2. I tried to learn welding, but it was not successful. Then, I joined the robbery gang. I am not the leader of the gang; the name of the gang leader is simply Dollar.”

Solomon, who lived on Baale Street in the Morogbo area, added that it was a tenant who paid for his bail when he was arrested by the Special Anti-Robbery Squad sometime last year.

PUNCH Metro learnt that the gang, which is said to have about 40 members, allegedly robbed residents and commuters in Ketu, Iyana Era, Alasia, Morogbo areas and environs.

Our correspondent gathered that on the night of the fateful Sunday, the gang stormed Palace Road and Amosugboro streets in the Ijanikin area, and carted away money and valuables.

The Anti-Robbery Squad from the Ijanikin Police Division, which received a distress call, was said to have attacked the gang and apprehended five of them.