‘I Needed N300,000 to Sponsor my Football Career in Sweden’ - Robbery Suspects 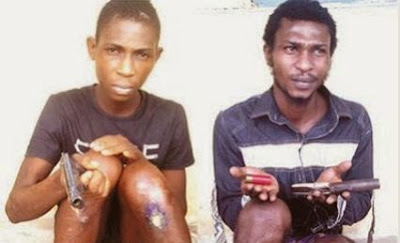 The Lagos State Police Command has apprehended two robbery suspects, Stanley Okorie and Emmanuel Enu, one of who confessed to have robbed because he wanted to travel to Europe. Our correspondent learnt that 25-year-old Enu and Okorie, 20, were nabbed by operatives of the Special Anti-Robbery Squad in the Satellite Town and Ajegunle areas of Lagos in two separate robbery operations.

Punch learnt that Enu, who hails from the Boki Local Government Area of Cross River State, was arrested with one locally-made shotgun and one cartridge. According to the police, Enu belonged to a gang which robbed on motorcycles on Oduduwa Road in Ajegunle. Enu, who claimed to be the son of a retired naval officer, said he had gone into robbery to raise money to travel to Sweden for a football career. He said,

“After I finished secondary school, I started work as a security man at a terminal in Apapa. I was earning N18,500. When I lost the job in 2014, a friend introduced me to robbery. His name is Onuora. He also brought the gun.

“On that day, we took off from around the Wharf area, we were on a motorcycle. We snatched one man’s phone, and Onuora said he wanted to ease himself. While he was doing that, some policemen on two motorcycles arrested me and found the gun in a bag that I was holding. Onuora, however, escaped.

“My father is a retired naval officer. When I was working as a security man, I was saving money to pursue my football career, but when I lost the job, there was nothing.

“I have been to the Benin Republic and Togo to play football. I was looking for money to travel to Sweden. That was why I agreed to join Onuora for robbery. I was looking for N300,000 for the journey. I wanted to go for a trial in a football club there.”

However, it was gathered that the police recovered a toy gun from the second suspect, Okorie, while his accomplice, Chijioke, fled with a real gun. Okorie, from Delta State, said he had gone for about four operations in the Igando and Agbara areas of Lagos. He said,

“I was selling foodstuffs in the Iyana Ipaja area. I stay in Ajegunle with my friend, Chijioke. He was the one who used the real gun, while he gave me a toy gun.

The Lagos State Police Public Relations Officer, DSP Kenneth Nwosu, had yet to get back to our correspondent as of press time.