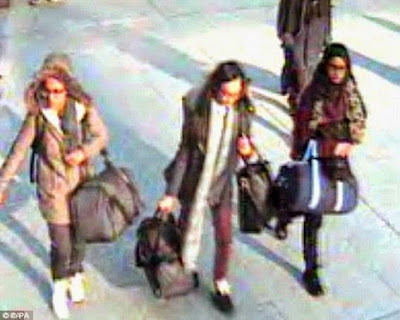 Three British teenage jihadi brides - feared to be three London classmates who ran away to Syria in February - are said to have escaped the clutches of their militant husbands and attempted to flee ISIS' ISIS are on a frantic bid to track down the girls thought to be about 16.

According to the facebook page of an anonymous anti-ISIS blogger in Iraq,Mosul Eye, the girls had fled on May 2.


'Three girls, (Foreigners - British) married to ISIL militants, reported missing, and ISIL announced to all its check points to search for them. It is believed that those girls have escaped,''The latest info I got on them is they are still on the run, but still in Mosul, and ISIL is thoroughly searching for them and hasn't captured them yet.'They are Brits, not immigrants, and they are very young teens (around 16 years old). That's all I have about them for now.'


The exact identity of the girls and their fate is not known, but their reported ages match those of the three friends from east London, who ran away to join ISIS in February.

Shamima Begum, Amira Abase and Kadiza Sultana - who were all pupils at Bethnal Green Academy - flew to Turkey together, before crossing the border into war-torn Syria earlier this year.

It is understood they were following another 15-year-old girl, another friend who travelled there in December.