Jimi Agbaje will never be governor - Oba of Lagos maintains 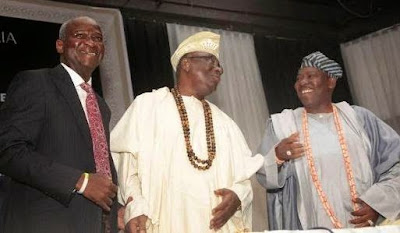 Oba of Lagos, Rilwan Akiolu, says Jimi Agbaje who contested and lost the Lagos governorship seat in the last governorship election will never be governor of Lagos state.

Oba Akiolu who first stated this in April while making his controversial speech to Igbo leaders, said he still maintains his position that Mr Agbaje will not be governor of the state. Oba Akiolu said this while speaking at the public policy lecture organized by the Institute of Directors, IoD and launch of the book "The Example: The Era of Babatunde Raji Fashola as Governor of Lagos State,’ in Lagos yesterday May 6th. Read what the Oba said after the cut...

"On May 14, 2014 when I first told all residents of Lagos that the next governor of the state will be Ambode, many didn’t believe me. I knew all the waters that have passed under the bridge, including my own blood relations, who without consulting me went with others to say that Bola Tinubu, Fashola and Oba Akiolu have pocketed Lagos, saying that this time, they will not allow that. And I told them that Jimi (Agbaje) will never be the governor. I still maintain it. There is no going back. I have no doubt in my mind, with the cooperation and prayers of everyone, Ambode will perform very well. I told many people that Bola Tinubu planted the seed, Fashola came and watered the seed and it started germinating in geometrical progressions. We have just started" he said (Source: Vanguard)