Johnny Depp Could Face 10 Years in Prison After Sneaking His Dogs into Australia! 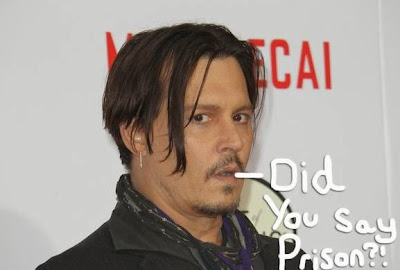 Johnny Depp may be facing potential jail time after he reportedly brought his two dogs illegally into Australia earlier this month. His crime could land him 10 years behind bars and with a fine of $340,000.

As we previously reported, officials down under threatened to put the Mortdecai actor's two yorkshire terriers down if he didn't evacuate them.

It's also reported that the pilot that helped smuggle the dogs in could be facing two years in prison. Oh no!

Officials have referred to the case as being very serious — we just hope this won't effect the star's filming schedule for his latest Pirates of the Caribbean film. We need more Captain Jack Sparrow in our lives!

Apparently, in Australia, all dogs brought into the country must be quarantined for at least 10 days in order to prevent diseases from being spread. Very inneresting!

At least the pups have been safely evacuated and are currently with the quirky celebrity's wife, Amber Heard.

Amber, if you need to return to Australia to be by your man's side, we'd be more than happy to dog sit!! HA!