Jonathan handing over a very bad economy to us – Osinbajo 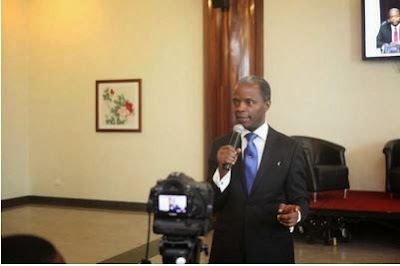 The Vice President-elect, Prof. Yomi Osinbajo, has said the Muhammadu Buhari-led government will inherit the worst economy ever in the history of Nigeria from Goodluck Jonathan.

Also, a former British Prime Minister, Tony Blair, has advised Buhari to take advantage of the country’s current level of public support for him to take hard decisions and reposition things fast.

Osinbajo and Blair spoke at the opening of a two-day Policy Dialogue on the Implementation of the Agenda for Change, which began in Abuja on Wednesday.

Osinbajo put the nation’s local and international debt profile under Jonathan at US$60bn with a 2015 debt-serving bill of N953.6bn, representing 21 per cent of the entire 2015 budget.

He noted that an estimated 110 million out of the nation’s over 170 million population, were living in extreme poverty while the largest chunk of the benefits of the nation’s wealth was going into the pockets of a small percentage of the population.

According to him, the nation’s dwindling oil revenues has made it difficult for 24 of Nigeria’s 36 states to pay salaries.

He said, “We are concerned that our economy is currently in perhaps its worst moment in history. Local and international debts stand at US$ 60bn.

“Our debt servicing bill for 2015 is N953.6bn, 21 per cent of our budget. On account of severely dwindled resources, over two-thirds of the states in Nigeria owe salaries.

“Federal institutions are not in much better shape. Today, the nation borrows to fund recurrent expenditure.”

Osinbajo said the manifesto of the APC "offers a vision of shared prosperity and socio-economic inclusion for all Nigerians that leaves no one behind in the pursuit of a prosperous and fulfilling life."