Home Gossip News Kashamu locked in his bedroom, talks through the door - Lawyer

Kashamu locked in his bedroom, talks through the door - Lawyer 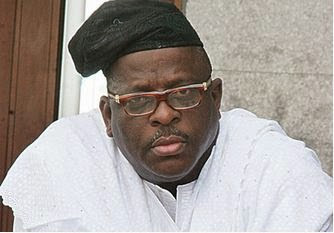 The National Drug Law Enforcement Agency has advised the Senator-elect for Ogun-East senatorial district, Mr. Buruji Kashamu, to concentrate his effort on defending himself before the Federal High Court where he is expected to appear on Monday (today).

In a statement by its Head of Public Affairs, Mr. Ofoyeju Mitchell, on Sunday, the NDLEA urged Kashamu to save his energy for the hearing of the extradition application.

His lawyer, Ajibola Oluyede, who spoke with our correspondent near the residence, on Sunday, said Kashamu who was very had not been allowed to leave his bedroom since Saturday.Oluyede said,


“He has been locked inside the room while about 15 armed operatives are in the house. As I speak to you, I have not even seen him. We have only been talking through the door.This is disheartening because his little children and his pregnant wife are all in the house with him.”

When asked to comment on the allegation that Kashamu threatened suicide, the lawyer said, “

He is obviously traumatised but I wouldn’t say he is suicidal.”

Oluyede alleged that the NDLEA had no plan of taking Kashamu to court on Monday (today) but only later decided to do so because the media got involved.

About 15 patrol vehicles were seen blocking all entries that lead to Kashamu’s home while over 20 security agents were seen patrolling the street.

Residents of the estate were made to take alternative routes as all roads leading to Kashamu’s home were blocked.

In his reaction, the media aide to Kashamu, Austin Oniyokor, however, berated the drug agency, accusing it of being the mouthpiece of Obasanjo and George.


“We do not know when the NDLEA becomes the spokespersons for Chief Olusegun Obasanjo and Chief Bode George. We do not need them to tell us to address our issues.

“We are addressing our issues. We had told the court of the planned abduction of Kashamu and the NDLEA was represented. The court had given an order asking all the parties to stay action, pending the determination of the suit which had been fixed for Wednesday.”

The agency said it was wrong of Kashamu to finger Obasanjo and a leader of the PDP in Lagos State, Chief Bode George, as being behind his present travails.

According to the NDLEA, Kashamu had been on the wanted list of both the US Drug Enforcement Administration, and the Immigration and Customs Enforcement of the Department of Homeland Security.

Kashamu fell out with former President Olusegun Obasanjo and teamed up with President Goodluck Jonathan during the battle for the control of the party in Ogun State.