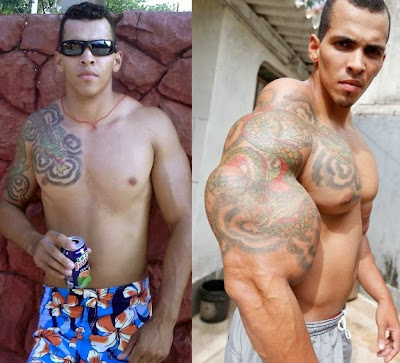 A bodybuilder who wanted to look like the Incredible Hulk risked his life injecting oil into his arms.

Romario Dos Santos Alves, 25, turned to a cocktail of oil, painkillers and alcohol to pump up his biceps - with astounding results.

The married dad-of-one says his experiences of using the synthetic filler synthol cost him his sanity and nearly his life and he was even scheduled to have one of his arms amputated.

"If you take it once there will definitely be a second time - it's addictive.

"I remember the doctor told me that they would need to amputate both arms - they said everything in there, all my muscles, were rock.I want other people to see the dangers, I could have died all because I wanted bigger muscles. It's just not worth it."

"I saw some really big guys in the gym with huge arms and I started to make friends with them.They introduced me to synthol and I got excited about the results - I lost control."

Romario began to find ever more dangerous ways of injecting himself with the oil.

"My muscles started to solidify and I couldn't even inject my arms - they were full of rocks," he added. 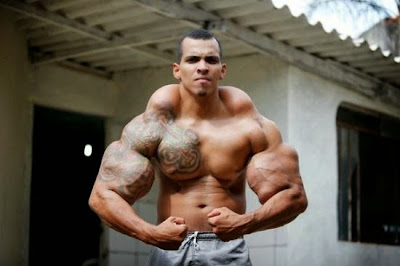 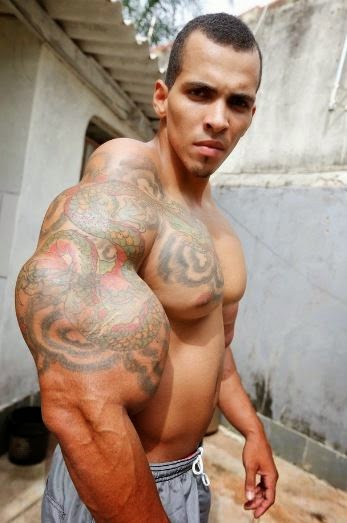 "I decided the only thing I could do was buy specialist needles to inject. The kind of needles used on bulls - there are no stronger needles around - I know it seems stupid but I had to get my synthol fix."

He even tricked wife Marisangela Marinho, 22, into injecting him with the oil in places that he could not reach.

"I told her there was no problem with it - that it left the body after a short time."

But after she learned the truth she made it clear that he had to choose between their relationship and the synthol.

"She told me that if I start using synthol again or anything like it she will leave me because of what she went through," added Romario.

"That was the hardest part of our life because I had depression and I was removed from my job because I tried to kill myself."

Romario's biceps had swollen to an incredible 25 inches but reactions from members of the public meant that his mental health deteriorated.

He said: "I was hospitalised in a clinic and my wife was six months pregnant - it was just me and her, no friends or family."I decided to fix my ways and I never again wanted to take any drugs, we went through a really hard time and almost starved."

Soon the filler began causing Romario constant pain and he almost suffered kidney failure due to the toxins in the oil.

And he was told by a doctor that his only course of action would be to have one of his arms amputated.

"My wife was crying when I left at 5am to go to the hospital for the procedure," he added."I remember the doctor told me that they would need to amputate both arms. They said everything in there, all my muscles, were rock.

"It was either that or cut all of my muscles out.

"And then thank God the doctor told me that they did not have to amputate - they could instead remove the synthol rocks which had formed in my arms."

Romario has not used the substance for two years but other muscle enhancing drugs still tempt him from time to time.