A 29-year-old mechanic, Bode David, is yet to recover from being made to spend a night with the corpse of his friend, late Ganiyu, and drink the water used to wash it, to prove he was not responsible for his death.

It was gathered that the incident, which happened at Isheri Magodo, a suburb of Lagos, was executed because before Ganiyu gave up the ghost in the hospital, he kept calling Bode’s name.Recounting his ordeal, Bode, an indigene of Ekiti State, a mechanic, who specialized in fixing Japanese vehicles, said:

“I knew the late Ganiyu and Wasiu in January, when I was looking for someone to fix my faulty Honda car.“That was when Ganiyu introduced me to Wasiu to fix my car. After he fixed my car, I paid him N35,000. Since then, we have had no business except when our paths occasionally crossed and we exchange pleasantries.On Tuesday, Wasiu called me at about 6p.m., saying they need my help urgently. He said Ganiyu was in the hospital and that they needed money to purchase pints of blood and drips, which was about N19, 000.He pleaded with me to come. At about 7pm, without any idea that Ganiyu was dead, I drove my car to the junction of their street, called him on phone that he should come and collect N5,000, which was all that I had to assist Ganiyu’s treatment at that time.When he came to where I parked my vehicle, he said the hospital was nearby, so we walked towards where he said the hospital is located.

“As we walked, I began to notice some strange movement in the vicinity as bad boys filled the area, so I asked where exactly the hospital was. He said we are taking a short cut to the hospital.Eventually, the short cut led to a compound. Immediately we entered the compound, people began to ask me what I knew about Ganiyu’s death. I told them I knew nothing, but they did not believe me, and they began to beat me.

‘’When they were beating me, a Baale in the area interrogated me, told them to stop beating me and to hand me over to the police, or they might beat me to death and then have two corpses on their hands. But they refused.“After beating me, they forced me to sleep on the floor in the same room where Ganiyu’s corpse was laid to prove that I had nothing to do with his death. While they were beating me, my phone and the money in my pocket got missing.

“When they discovered that I was still alive, they washed his corpse and forced me to drink the water. I refused but they almost killed me with another round of beating. When it was obvious that I had no option, I drank it.

“After I drank the water, someone who claimed that he knew me called the police. The police took me to divisional police station at Awoshika, before the case was transferred to Area F Command.

“I have nothing to do with Ganiyu’s death. How would I be responsible for his death when I had no problem with him? All I want is for government and Nigerians to come to my aid, and bring those who meted this inhumane treatment to me to justice.’’ 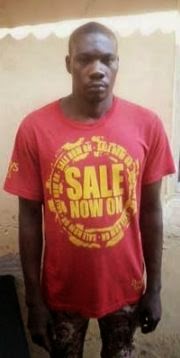 In his defence, 33-year-old Wasiu Fadairo, the mechanic who lured Bode with the call that brought him to the house, said:

“I am from Kwara State. The late Ganiyu is from my home town.On May 12, Ganiyu was stooling and vomiting blood, so we rushed him to a hospital located along Oluwora Road, Isheri in Magodo. He later died, calling a particular name— Bode.

“After he died, we took him home because none of his immediate family members or relatives was available. When we called them, they said they were coming, so we kept his corpse inside his room.

“That same day, neighbours and people living around were angry, alleging that the name Bode, which Ganiyu kept calling before he died, was responsible for his death. So they began to call Bode’s phone number.

“When Bode did not come, I called him with my phone and told him that Ganiyu was lying critically ill and needed blood and drips, and that we need his assistance.

“When he came, people began to question him concerning what he knew about Ganiyu’s death. Before he could say a word, they pounced on him and began to beat him. So I ran to call the police to come and rescue him.

“After police rescued him, they later went to where he parked his car and vandalized it. I was there when they were beating him, but I was not there when they forced him to lie beside the corpse and drink the water used to wash it.”

“Two friends went out for a drink and one of them, Ganiyu, took ill after the outing and started stooling.He was rushed to the hospital for medical attention, but died in the process. Angry friends and neighbours, suspecting the complicity of Bode David, descended on him and attempted to lynch him.

“He was, however, rescued by our policemen and investigations into the circumstances surrounding the death of Ganiyu commenced at Isheri Division. But the case has been transferred to the Department of Criminal investigation, DCI, Yaba, for further investigation.”