Man sent into exile on a Wheelbarrow in Imo State [PHOTO] 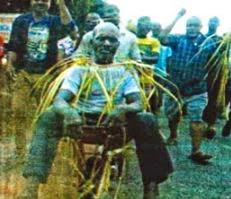 A native of Ezima village in Isiala Mbano Local Government Area of Imo State, Mr. Charles Ikegwuruka, has been driven in a wheelbarrow into exile in his maternal home, Isu, in the same local government.

Narrating his ordeal to Southern City News, Charles (in his mid-50s) said his brother (Osiwu) accused him of making his wife (names withheld) barren.

It was gathered that Charles had consulted a native doctor, who told him that a woman in his family had a “marine husband and child” and would not be able to bear children. The native doctor directed that the woman be brought to the shrine for cleansing.


“On the day of the cleansing, the native doctor took them to a river, killed a goat and strangled a fowl. He made incantations an ordered her to strip naked for a bathe in the river. Osiwu and Charles were there and watched her perform as instructed,” it was gathered.

It was, however, learnt that the cleansing failed to cure the barrenness; instead it led a crisis between Charles and Osiwu.

Southern City News gathered that the conflict was heightened when Osiwu received a letter from the Okija shrine, at the instance of Charles, summoning him and his wife to visit the shrine to swear an oath.

Osiwu reported the development to his kinsmen, who ordered Charles to withdraw the matter from Okija shrine. But Charles told the elders that the shrine refused to approve that the matter be withdrawn.

Charles’ kinsmen immediately resolved that he must ride on a wheelbarrow with palm fronds tied around his neck to his maternal home and stay there until he withdrew the matter lodged before the dreaded Okija shrine.


“Our son (Charles) has committed sacrilege. We can’t finish resolving a matter and still take it to a shrine, coupled with other atrocities Charles has been committing,” one of the kinsmen, who chose not to mentioned, said.