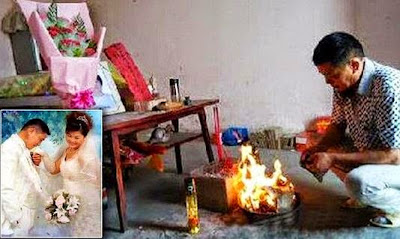 A man who has kept his dead wife's body in an 'ice coffin' in his living room for five months is being investigated by police in China.

Jiang Maode, 53, has been storing his wife Yang Huiqing in his family home for the five months since she died but has no plans to remove the body in the near future. Maode insists he will keep her body in their home for the rest of his life, reports the People's Daily Online.

Just before she passed away I promised her that I would keep her at home,' said Maode, who burns incense by the coffin every day.

He has even erected a small shrine in the room, in their home in Tian Yuan County, which is decorated with flowers and photos of his wife. Maode talks to his wife's body every day, insisting that he couldn't bear to be parted from her.

In the meantime, visitors are still willing to pay visits to the house and even let their children play alongside the coffin.

Huiqing, originally from Mianyang, was diagnosed with leukaemia in July 2014 but the diagnosis came too late to save her and she died on December 19. 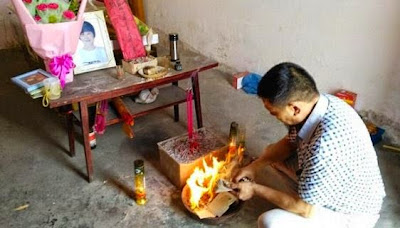 She asked me to take her home,''She couldn't bear to leave me and I could not bear to be separated from her. 'I promised her that I would keep her at home after she passed away and when she heard this she was very happy.'When I come home I often speak to her for over an hour, talking about everything that had happened that day.'

'I was wearing yellow shoes and a pair of pants with a big hole in them,' said Maode. 'I wasn't wearing a top and only had a small crop of hair. It was a very bad impression to give her.'I was very poor at the time but she never looked down on me. She was still willing to be with me.

Maode added that after her death he cried every day for 28 days, and lost more than 20lbs.

The couple's son wants to have his mother's body cremated at the end of the year, but Jing insisted he couldn't bear to let that happen and intends to keep her body with him for ever.