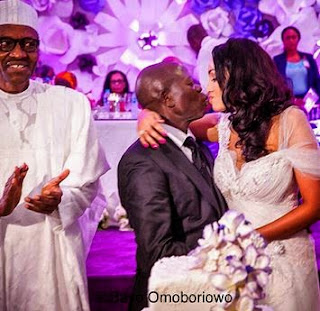 Edo State Governor, Adams Oshiomhole, says his wife, Iara Fortes, is not a model, however, she is a model in his heart.

According to the former Labour leader, his newly wedded wife has never been a model, even though she is beautiful.

At a special thanksgiving mass held at the Immaculate Conception Cathedral in Auchi in honour of the new couple, on Sunday, May 17, Oshiomhole shut down the widespread notion that Iara is a ‘top model’

“When I read newspaper stories and they say that Comrade has married a ‘top model’ I’m like, ‘Maybe it’s another person.’

“The lady that God has directed to my path and heart to marry is not and was not a model. Of course, she looks beautiful and I understand that is why people assume that this kind of a lady must be a model; but of course, she is a model in my heart and we hope and pray that we will be models in the heart of our God and I think that is the most important thing.”

The governor also called for prayers from Nigerians to support him and his new wife.

“I ask you to please continue to pray for us; it is not easy. I lost my first wife and it is not possible to replace her. Yes, I have married another, but it is not a replacement.

“You cannot replace a wife, especially the one you married when you were young and you were anonymous. Nobody knew you from anywhere; you had nothing; no car, no house. Now, that you can never replace, but I understand that under the Catholic doctrine I am entitled to have another wife which is what I am trying to do.”