My wives know I'm a criminal, I'll miss them - Suspect 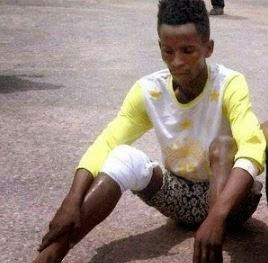 A 27-year-old suspected kidnapper, Rasheed Adetunji, who was paraded has confessed that his two wives knew he was a criminal and not a kidnapper.He also revealed that he used part of the ransom money collected from victims to get married to them.

According to the Osun State-born Adetunji, his love for women is responsible for his having two wives at his age and had hoped to marry more before he was arrested.

He told Vanguard that one of his wives had a premonition of his current travails and warned him to stay away from members of his gang.

He regretted that he would miss his wives and family who, he claimed, he was trying to make happy.

On how he joined the kidnapping gang, he said it was Niyi Omosola that introduced and placed him and other members of the gang on an oath administered by a native doctor, known as Baba.