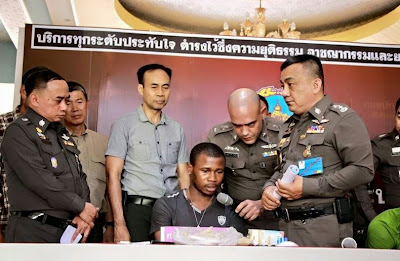 A 29-year-old Nigerian, Onyejiekwe Morgan Chinemerem, has been arrested by the Thailand Metropolitan Police in his rented room in Bangkok for allegedly masterminding the sale of crystal methamphetamine and cocaine.

He was arrested in a sting operation with 31.47 grams of crystal methamphetamine or “ice” and 889.63 grams of cocaine as revealed by Metropolitan Police Commissioner Police Lt Gen Sriwarah Rangsitpramkul and Police Colonel Suthep Chanasit, an inspector of the Metropolitan Police Division 4, in a press conference at 4 pm on Tuesday, 29th of April.

According to Suthep, the Nigeria man was arrested at the stairway between the 8th and 9th floors of HR Residence in the Bang Kapi District while trying to flee.

He said the police got tips that Nigerian men living on the 9th floor of Building 17 of the HR Residence have been involved in the sale of hard drugs by hiring a Thai man, who was identified only as ‘M’ as their courier/delivery boy.

Thus, the police set up a sting operation that involved police informant getting across to M asking him to purchase the crystal meth and cocaine from him.

M led the detectives to the room of the Nigerian men to buy the drugs and it was there the police found two Nigerians in the room.

Once the police identified them, two Nigerians ran out of the room, one fled the scene and Chinemerem was arrested at the stairway and he later confessed that he and his friend were responsible for smuggling the drugs to sell mainly using post parcels.

The charges levelled against him include the possession of crystal methamphetamine and cocaine with the intention to sell.