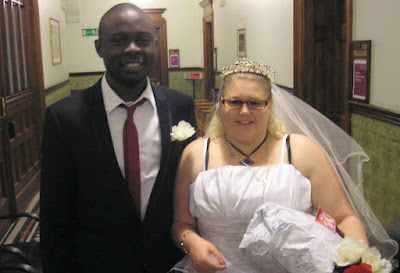 Deana Charles was left humiliated when her Nigerian groom was found texting another woman just half an hour after their wedding. Then he admitted he only married her for a visa.

Sales assistant Deana, from Tiverton, Devon, met Ben, 25, on a dating site in 2010. She was instantly attracted to his looks and was hooked after he struck up a flirty conversation with her.


“My whole world came crashing down when I found out my marriage was a fake. I loved Ben with all my heart. We’d made loads of plans for the future and he seemed desperate to start a family.

.”I wasn’t serious about finding love, I’d only signed up for a bit of a laugh. As soon as I saw Ben’s picture, though, I was smitten. He had gorgeous brown eyes and a great body — just my type. We started chatting and he explained he’d come to the UK from Nigeria to study for a business degree. I couldn’t imagine being so far away from my family and friends and I told him he was really brave.”

sponsored post
Ben was persistent online and was keen to meet up as soon as possible. Deana was nervous at first but, three months after they started talking, she agreed to travel to London to meet him for a day of sightseeing. She continued:


“It was the perfect first date. Ben took me to see Big Ben and we went to the National Maritime Museum in Greenwich. As soon as we shared our first kiss I could feel myself falling for him.

He asked me to stay for a few days and I said yes. It felt like I’d known him for ages.”

Days turned into weeks and, after a fleeting visit home to pick up some belongings, Deana agreed to move in with Ben in Catford, South East London.


“I was surprised when he asked me to move in with him so soon but I was also really excited. But my mum was really concerned that I was giving up everything for someone I’d only just met.Some of my friends said the same. No one was completely sure of him. I just shrugged off their concerns because I was convinced he was the right man for me.”In August 2011, six months after they first met in person, Ben popped the question.
“Ben asked me to marry him while we were having breakfast at home. It wasn’t very romantic. He didn’t even get down on one knee, but he did buy me an imitation diamond ring. I was shocked he wanted to marry me so soon but I was completely in love.”

Though she’d dreamt of a big, romantic wedding, Ben was determined to wed as soon as possible. So Deana agreed to a register office wedding in January 2012, with a low-key reception at a local Chinese restaurant.


“My family were concerned but they all turned out and supported me. When I walked down the aisle Ben told me I looked stunning. And I meant every word of my vows.”After the ceremony, Deana urged Ben to call his family to tell them the good news.

“He was reluctant to get his phone out. He eventually agreed to call his mum but when I looked over his shoulder at the screen, a message flashed up from a girl. She’d texted Ben to tell him she loved and missed him. My legs turned to jelly as I remembered she was his ex-girlfriend in Nigeria. was in pieces but Ben begged me for another chance. He said he’d only text her because of last-minute nerves. I didn’t want to storm out of my wedding so, after lots of tears, I let it go.”

“I wanted to wait a few years before getting pregnant as I was still worried about the message. But Ben was determined to be a dad. I thought it was his way of showing he was serious. We tried for a baby but we struggled to conceive.”

But 13 months into their marriage, Deana borrowed Ben’s laptop and her worst fears were confirmed.


“My heart stopped when I saw he’d been sending messages to a girl on a social network site and she had sent him explicit pictures. Ben told her he loved her and wanted a baby with her.

Minutes later I received a message from the girl — she felt so guilty, she’d messaged me to come clean.”

“When he realised there was no way back, he told me he’d only married me for a visa. It explained why he’d been so keen to get me pregnant — the authorities would find it harder to deport him.”Disgusted Deana packed her bags, returned to Devon the next day and filed for divorce. After two years, Ben finally agreed to it. Deana says:


“I felt relieved. Looking back, I realise how naive I was. Ben was due to finish his degree when he proposed, which meant his student visa would expire. He had to get me up the aisle as soon as possible.”

Deana, who has not spoken to Ben since their divorce and no longer knows where he lives, says:


“It took me a long time to trust another man but I have recently met someone and am trying to move on.”


“My mate used to send me dirty pictures of girls he was seeing. I knew my wife would get jealous if she saw them on my phone so I got rid of them or sent them to my email. She must have checked my email that day and then found the pictures.”