Non-indigenes in Lagos must respect their hosts - Oba of Lagos 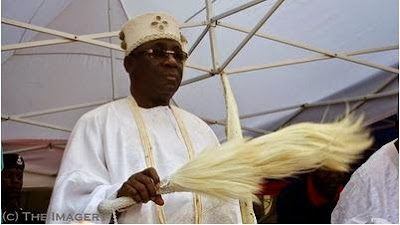 The Oba of Lagos, Riliwanu Akiolu, says there is a need for non-indigenes in Lagos State to respect the tradition and culture of their host.The monarch said this during an exclusive interview with Punch

While responding to a question on the threat he issued out to Igbo residents in Lagos State if they did not vote for Akinwunmi Ambode of the APC, Akiolu said


“Eze Odimegwu, who is a former CEO of Nigerian Breweries, is still my best friend as well as many others. The Obi of Onitsha came to visit me here a few days ago. When you go to a place, you have to respect the host leaders, particularly the traditional leaders there because you are coming to benefit from their success.

“The people of Lagos are the friendliest and most accommodating people in Nigeria.Those who orchestrated the entire incident know themselves and I tell you, those (Igbo leaders) who came here on that day understand me a lot and have even been coming since then,” he said.

Akiolu said many of the non-indigenes were deceived by politicians in their quest for power...He said

“The man that promised to hand them deputy governorship slot and four commissioner positions and would elevate the status of Eze Ndigbo to that of Oba of Lagos has since denied it.

“It was all a political gimmick because I am sure they know that he was only deceiving them. As a matter of fact, prominent traditional rulers in the South-East have been writing us to say that they are not happy about the large number of ezes in Lagos.”“By the Grace of Almighty Allah and my ancestors in this house, the Governor-elect, Ambode, will rule for eight years with a good performance.”