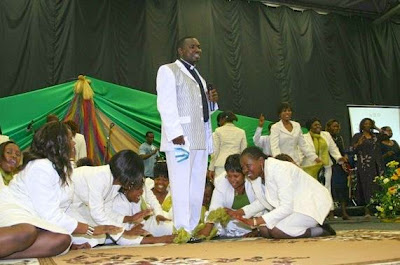 Walter Masocha, 51, the founder of Agape for All Nations Church, has been found guilty of abusing sexually assaulting a deaconess and sexually touching a teenager.

The shamed preacher surrounded himself with women he called Daddy’s Dancing Girls.

Zimbabwe-born Masocha, regularly invited women worshippers to private “surgeries” held in his bedroom but banned their husbands from attending, the Daily Record reported.

Falkirk Sheriff Court heard that he groped a deaconess while he was supposed to be praying for her stomach complaint and put his hand down a schoolgirl’s trousers saying he was trying to remove demons.

When the 32-year-old victim told her husband, also a member of the church, he said: “The prophet is seeing something in your genitals that needs to be removed, so he was removing that.”

Church members later tried to have her sectioned.

The church has worshippers from all over the UK but the Stirling congregation was seen as its lynchpin.

At church services, women would lay down at his feet, as he performed a so-called “deliverance” ritual by touching their heads.

Former Stirling University lecturer Masocha, who was paid by the church, has also been accused of putting pressure on his followers to part with their cash.

A church member told the Mirror: “Soon after the church was set up, Dr Masocha gave up his post at the university.

“It meant that the members had to support him financially which was a big burden for us all. People were encouraged to give as much as they could.

In April, a jury at Falkirk Sheriff Court convicted Masocha of sexually assaulting the deaconess and sexually touching the teen.

He had earlier been cleared of two other charges, including one of sexual behaviour with a 13-year-old girl.

He is due to be sentenced on Tuesday for the incidents which happened between January 2008 and December 2010.