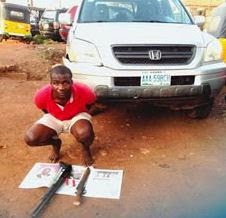 Anidi Reginald pictured above, a 27 year old Computer Science graduate from a University in Cotonou has been arrested by men of the Enugu state police command for working with other members of an armed robbery gang to snatch a car from their victim at Ozalla, in Nkanu West Local Government Area of Enugu state on Saturday May 16th.

Punch reports that the robbers had attacked and snatched a Honda Pilot car, with registration number AAA 598 CH from its owner and were heading for Enugu metropolis when the police was alerted about the robbery incident and a hot pursuit ensued. The robbers and the police engaged in a gun battle which led to the arrest of Enugu born Anidi while his other members escaped.

When interrogated, Anidi said unemployment made him go into armed robbery.