Home Gossip News Policemen forced me to give N10,000 bribe or get framed for robbery - Motorist

Policemen forced me to give N10,000 bribe or get framed for robbery - Motorist 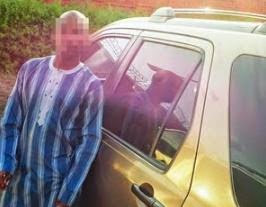 A motorist, Niya Ezra, says he was forced to bribe four policemen attached to the Ondo State Police Command’s Fast Strike Squad N10,000 to avoid being set up as an armed robber.Two of the policemen were identified as Sergeant Idoko Edache and F. Temitope.

Punch Metro learnt that Ezra, an employee of the Nigeria Institute of Medical Research, was travelling to the Akungba area of Ondo State to check his sick sister on April 25 when the incident happened.

Ezra said he had slowed down at about 12am on Ondo Road in Akure for the cops and wound down the glass of his vehicle.

“They are Fast Strike Squad with a patrol van marked, 04. I slowed down, winded down the door glass of my jeep and greeted them. They looked inside my car and told me to go.”

Ezra said as his journey continued, he was flagged down by another patrol team and the policemen ordered him to go back to the previous point for his vehicle to be properly checked.

“When I got there, they told me to park near a bush and proceeded to search the car. I folded both the front and back seats of the vehicle for them. They discovered I did not have anything incriminating. They checked my vehicle particulars and the chassis number and confirmed they are correct.”

After the search, the victim said the team suddenly became hostile and ordered him to pay N10,000 or be arrested for armed robbery.

“They threatened to frame me up for robbery if I failed to cooperate. At a point, one of them said if they really wanted to deal with me for proving stubborn, they would radio their station that an armed robber had been arrested.

In the recorded conversation made available to our correspondent, a policeman, who spoke in pidgin, was heard saying,

“Your money is N10,000 I don tell you (referring to Ezra). Even N9,999 is not acceptable. When we stopped you why you no stop? You don suffer us instead of you to pack jeje (gently).

“Where one army (soldier) dey, una go pack, come down inside motor, carry leg go meet am and put money for inside drum.”

Ezra said he paid the money to avoid being set up by the cops. He said he had confidence in the police until his experience on the fateful day and urged that the cops be disciplined for the act.

“They did not see me with anything incriminating. But I had to bribe them at that moment because I saw that they were very desperate. It means they have been doing it to innocent citizens. I want them to be brought to justice.”

The police spokesperson, Ondo State Command, Wole Ogodo, said the cops had been quizzed and found culpable. He added that they had been locked up in custody as a preliminary discipline.

“He (Edache) wanted to deny, but I told him he can’t. Everybody knows me. I don’t compromise on discipline.

“Presently, I have ordered that he and his team members be locked up. For further disciplinary action to be taken on them, it requires that the man comes forward to give evidence. I thank him for being able to identify two of the cops.

“Meanwhile, on behalf of the command, I want to appeal to the man not to use the few bad eggs to judge the entire police force. I assure him that justice will be done in this case.”