A blog reader tells a scary and interesting story of something he witnessed in Enugu and backed it up with photos. Things are really happening. We all need to be careful out there. Read story below...


Two days back, being Wednesday, on my way back from school, I witnessed something extra-ordinary. If you are familiar with Enugu metropolis, this happened at MSP bus-stop, the one before IMT gate(Institute of Management and technology). As I was walking home approaching the bus-stop to enter a bus, one bus swerved in front of me and people started jumping down from the bus and each person that came down began crying. They were saying a pregnant woman who was in the bus was being charmed and made dumb by a one-eyed beggar who was also in the bus.

As was narrated by one of the occupants who was weeping, she said the pregnant woman who had entered the bus before the the one-eyed beggar had answered a call on her phone and a few bus-stops later, the one eyed beggar who was obviously identified as a beggar because of his music instrument entered the bus. When the pregnant woman wanted to then get down at her destination, she couldn't speak again, she tried motioning to the driver but the one eyed-beggar who sat beside her told the conductor that they haven't gotten to their destination and that the pregnant woman was his wife and that she was dumb. This caused confusion in the bus as some occupants of the bus had earlier seen her answer a call and also knew she didn't enter the bus together with the beggar. The driver then stopped the bus and as the occupants got down and narrated what happened in the bus to the crowd that had obviously gathered cause of the alarm they raised, the beggar still insisted the pregnant woman was dumb and was his wife.

As people were suggesting to take them to the police station, the man in yellow who you'll see in one of the attached pictures rushed the beggar and began punching him and flogging him with his belt telling him to confess and say the truth. Before i knew what was happeneing, more peole including angry drivers, conductors, students and passer-bys who were obviously pissed by the grid-lock the commotion has generated on the road because of the crowd joined to beat the beggar. After about 5mins of beating, one of the men beating the beggar brought car oil and poured on the beggar and threatened that if he didn't confess that he'l be set ablaze. That was when the man confessed that he touched the woman with his ring.

They asked if he could un-do it and he said yes. He removed the ring from his finger and touched the pregnant woman's fore-head and she regained her speech. I was shocked and dumb-founded. I had never seen such or believed such things existed. After seeing the pregnant woman regain her speech, the crowd then began the real jungle justice on the beggar, they beat and kicked him the more and called him a "heartless ritualist who wanted to use a pregnant woman and her unborn child for blood money". Mean-while the pregnant woman who had regained her speech wasn't acting normal. She had lost total memory and the only name she could remember was that of her sister which someone among the crowd collected the pregnant's woman's phone and retrieved the sister's number from her contact list and called her sister to inform her.

The police luckily arrived before the man could be set ablaze and everyone took to their heels. The few brave ones stayed behind to find out what the out-come would be and on interrogation by the police, the beggar confessed that the woman was his wife and accomplice and that he was supposed to touch her with the ring and make her dumb so she could join him in his beginning business. He said he touched her with it and she went dumb but that it also affected her memory and she couldn't realise where she was or what was happening which made her motion around like someone in distress inside the bus. While he was being questioned by the police by the side of the road, the pregnant woman sat by his side and didn't utter a word. Some said she lost her speech again. Some said she regained her memory and realized her game was up and quietly shut-up. The police later took both of them away with the beggar holding the ring in his hand. The pictures and videos of the beating, the pregnant woman and the one-eyed beggar are attached in the attachment. 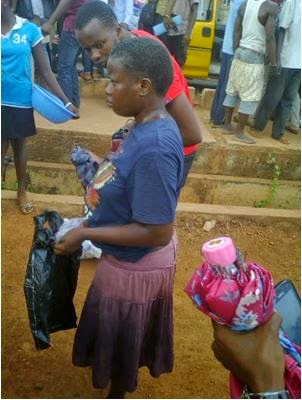