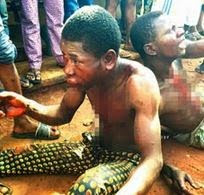 But for the intervention of the police, two suspected kidnappers would have been lynched in the Odoyanta, Ijebu Ode area of Ogun State on Sunday for allegedly kidnapping a fish farmer.

PUNCH Metro learnt that the fish farmer, identified only as Kowope, was attacked in his farm by the suspects at about 7am.

Our correspondent gathered that the men, who wielded cutlasses and charms, had told their victim that they were policemen from the Igbeba Police Division, adding that he should “cooperate” with them.

However, 30-year-old Kowope was said to have demanded the ‘officers’ ID cards, which reportedly led to a fight. The suspected kidnappers, said to be three, reportedly overpowered Kowope and tied his legs with a chain.
A resident, who heard the noisy exchange in the bush, was said to have alerted policemen from the Igbeba division, while another boy reportedly ran to alert other fish farmers in the area.

A resident, who is also a fish farmer, identified only as Kazeem, told PUNCH Metro that the people mobilised and rounded up two of the suspects, while the third escaped.

He added that it took the efforts of a few elderly residents to convince the mob not to lynch the suspects. He said the police from Igbeba, aided by a vigilance group in the area, took the men.

“The son of a fish farmer raised the alarm. When we got there, we met Kowope in chains. The men were rounded them up, while one of them escaped.

“After his release, Kowope told us that while he was feeding the fish, the men swooped on him. He narrated how they claimed to be policemen and when he requested their ID, one of them gave him a blow.

“One of the men also hit him with a cutlass before they chained his legs. After they tied him down, they reportedly called a woman in the community, known as Iyalode, saying they had caught a prey. They are believed to be working for the woman.

“A man also noticed the activities of the fake policemen and alerted the police, while some fish farmers also alerted the people in the area. When we arrived there, the kidnapers and the woman were about leaving.”

Our correspondent learnt that two of the men were caught, while the third escaped.PUNCH Metro, however, learnt that he was later arrested in the Iperin area of Ijebu.

“The police arrested one woman and two men in the area. We are finding out whether they are kidnappers or ritual killers.

“The police have a case against them and investigations are ongoing on the matter.”