Screaming man runs into church and dies in Lagos 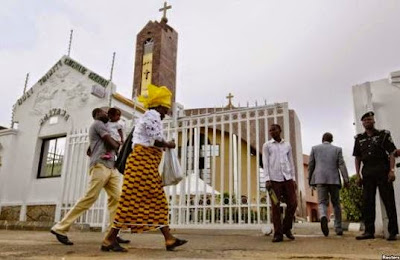 Controversy is currently trailing the mysterious death of a man in a church located in Peace Estate, Baruwa, Ipaja, Lagos.

The man, identified as Waheed Majekodumi, was allegedly found dead in a branch of Christ Apostolic Church.

It was gathered that the deceased, who lives in the Abule area of Ipaja and works in a block making industry, ran into the church shouting “help, help, I will die.” But before help could come his way, he gave up the ghost.

The resident pastor of the church, who gave his name as Popoola Oluwasumidotun, and a member of the church, identified as Folashade Ebun, who were both present at the scene of the incident, claimed they knew nothing about the death of late Waheed.It was also learned that the deceased, a 32-year-old father of four, had been divorced for the past seven years and had since lived alone.

“I am the Presiding Pastor of the church and I also live in the church compound.On Thursday morning, I was about to take my bath and prepare for a programme, which holds in the church every Thursday, when I heard Folashade, one of the members of the church, who also lives within the church premises, calling on me. I ran into the church auditorium where the shout was coming from.

‘’I saw her standing next to a man on the ground. I asked her what happened and who the man was. She said the man ran into the church shouting ‘help! help! I will die’ and then slumped. I did not know what to do.

‘’I rushed outside to find out if anyone around knows him. Fortunately, I saw the husband to one of the members of my church and I asked him if he knows the man and he said the man lived at Abule, a street not far from the church.Searching for Waheed’s home.

“Folashade and I went to Abule. We asked a few people if they knew Waheed and they said yes that he was a drunk.

“Some of the people around came to the scene of the incident, checked him and confirmed him dead.

‘’I immediately had to call my boss, the owner of the church. I also called his son who is also a pastor. When his son came, he advised we go and report the case to the police. So we went to Ipaja Police Station to make the report.”

In her defence, Folashade, a mother of three, said she was sweeping the church auditorium in readiness for a programme when the deceased ran into the church, calling out for help.

: ‘’Initially, I thought someone was chasing him, but I later discovered he was alone. He fell to the ground and I quickly called out for the pastor, who also came in almost immediately.’He asked what the matter was and I told him. Sincerely, we have nothing to do with his death. No matter what, I have confidence in the God we serve that He will vindicate us.”

Chief Idowu Animashaun, a relative of the deceased, told Vanguard that he heard about the incident two days after it happened.

“Waheed lived a reckless life. He took to drinking as a way of life and that was why I stopped him from coming to my house.”

Wife of the late Waheed, Mrs. Mohundat, also attested to the fact that her ex-husband lived a carefree life.

“I was married to Waheed for eight years and I had four children for him.However, in the latter part of our marriage, he took to drinking and leaving home for as long as two months without asking how the children and I were surviving.“For me, I do not suspect that anyone is responsible for his death.”