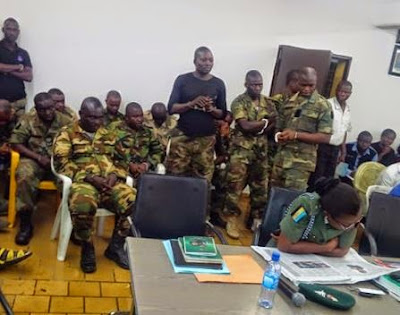 Human rights lawyer, Femi Falana (SAN), revealed on Saturday,that, 12 soldiers, who were sentenced to death for mutiny in September 2014, have been starved and held underground by the military.

“I am in touch with them (the soldiers) and I am taking up their basic complaints, which is that they are currently being starved and dehumanised by the military authorities that are supposed to have taken them to the jailhouse, having convicted them. But they are being kept in an underground cell somewhere in Lagos.

“The Chief of Army Staff ought to have confirmed the sentences since November (2015) in the case of the 12. And in the case of the 54 others, it should have been February, since they were convicted in December (2014). In other words, confirmation or review should take place less than two months after conviction.”

“The soldiers did not commit mutiny. They were asking for weapons to fight Boko Haram and Section 217 of the Nigerian Constitution says the government of Nigeria shall equip them adequately. In this case, the government failed in its responsibility to equip the army and simply asked these boys to commit suicide,” he said.

According to Falana, seven months after, the fate of the soldiers had yet to be determined because the confirmation had not taken place and they had been denied their right of appeal under the Armed Forces Act and under the Nigerian Constitution.