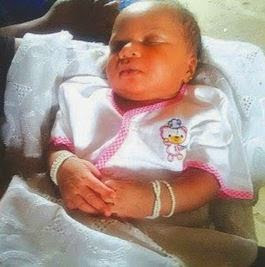 Despite adopting several family planning strategies, a 52-year-old grandmother, Mrs. Funke Adamson, has ended up giving birth to a baby girl clutching white ‘Ileke’ (Yoruba name for beads) on her hands. Funke, a traditional worshipper said she was delivered of the baby that has now been described by many as a “miracle child” on Monday, May 11, 2015 at a Trado-medical home in Apapa.Speaking to Vanguard, she said:


“I received a message from an Osun Custodian who said that a child is on the way for me. I didn’t believe him. I didn’t realize until the baby was three and half month old when I began to experienced flow of membranous fluid.”

When Vanguard visited the home of the Adamson at No.16 Olayinka Street, Ijora, Apapa-Iganmu Local Council Development Area, LCDA last Monday during the naming ceremony, it was gathered that Funke and her husband, Mr. Hamzat Adamson, 63-year-old never planned to have a child at this time.

Sources said that Funke who celebrated her 50 years birthday two years ago had already entered her menopause age. The baby named Bukola came three years after another 32-year-old single mother, Mrs. Kikelomo Ilori was delivered of a baby boy in a Cherubim & Seraphim Church, purportedly clutching a Holy Quran. On the signs discovered during her pregnancy, Funke noted that prior to her discovery, she couldn’t sleep comfortably for two months.


“So I started praying before I later discovered that I was pregnant. Also, while trying to open a perfume, it caught fire, which made me suffer severe burns. After discovering the pregnancy, I couldn’t sleep without having a dream. In these dreams, I often found myself sitting at the shore,” Funke added. After her birth, the grandmother explained that the traditional healers who attended to her raised alarm that they found the baby clutching white beads.

“When I heard this, I was afraid. I told them to inform my husband for any possible solution. Rather than demand that they discard the beads, he said they should be kept. After regaining my strength I removed the beads and tied it on her wrist,” she said. Corroborating her story, the husband, Hamzat said “I was surprised when I saw the baby delivered holding beads in his hands. But I realized that the beads are important and that was why we have decided not to throw it away.”

Similarly, Rashidat Ojesanmi, the Osun custodian who gave the family the prophesy said

She said so because of the family planning she had earlier done and considering her age. But as prophesied, few months later, she called me and told me of the signs she discovered.” Also speaking, a midwife, Mrs. Adenike Adeyemo, described the case as one out of ten cases, saying “it is rare to have such cases because at this age, the woman may have entered menopause stage.”