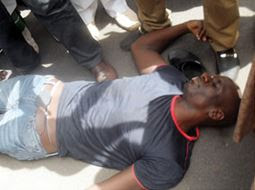 Thugs suspected to be APC loyalists in Nasarawa State on Friday beat Daily Trust correspondent in the state, Mr. Hir Joseph to astate of coma during Governor TankoAl-Makura’s inauguration in Lafia, the state capital.

It was learnt that the thugs were angry over an analysis the reporter made on President Muhammadu Buhari and Governor Al-Makura recently.

The incident occurred at 11.30 am, shortly after the governor and his deputy, Mr. Salias Agara, took their oaths of office at the Lafia parade ground.

Saturday PUNCH correspondent who was at the scene of the event noted that security operatives were able to rescue Joseph after throwing teargas canisters at the miscreants and chasing them away.

Narrating his ordeal to our correspondent, Joseph said,

“I was watching the inauguration with some colleagues when the thugs who had the inscription ‘Ta’Al Boys’ on their T-shirts demanded that I follow them.

“I asked why they wanted me to follow them but they gave no answer. Rather, they pounced on me and dragging me at the same time. I only woke up in the hospital after.”

The chairman of the state’s correspondent chapel, Suleman Abubakar, condemned the act and vowed to take the matter up with the appropriate authorities and ensure that such incident was not repeated. 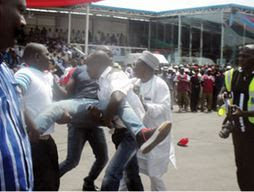