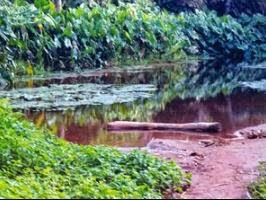 An unemployed man, Ishau Arowolo, has been arrested for allegedly raping a 10-year-old girl, Sofiatu Akilolu, to death in Orisada-Eyo Community in the Yewa South Local Government Area of Ogun state.

According to Punch Metro 25-year-old Arowolo, after raping the girl, allegedly caused her to drown.

It was said that the suspect lurked in a bush near the community river to perpetrate the act.

Sofiatu, who was a Basic five pupil of the Local Government Authority Primary School, had been sent by her parents to a river in the area to fetch water when she was attacked and raped by Arowolo.

Sofiatu, at about 5pm on Wednesday, April 1, went to the stream in company with a friend, identified simply as Abibatu. It was gathered that Arowolo snatched the victim and took her under a tree, where he raped her.

A resident, who identified himself only as Jamiu, told Punch Metro on Tuesday that Abibatu alerted the community that Sofiatu was being raped in a bush.

He said, “The river is called Agude. It serves the community. That was not the first time little girls would go to fetch water at the place. On that day, the two girls met Ishau (Arowolo) and greeted him.

“Later, they observed he was coming behind them. Suddenly, he grabbed Sofiatu and entered into a bush to carry out the act. The other girl ran back to the community to tell us.

“When we got to the place, we did not find both of them, except their clothes and shoes. We began to comb the forest, until someone raised the alarm that Arowolo was hiding in the river. When we checked, he was found and pulled out.

“Minutes later, we also found Sofiatu. He might have drowned the girl after he raped her. She was unconscious, while blood was dripping from her private parts.”

Sofiatu was taken out of the river and rushed to a nearby hospital, where she was confirmed dead.

Angry youths, who learnt of the girl’s death, reportedly beat up Arowolo, but they were said to have been prevented from lynching him by elders.

The Baale of the community, Chief Adeogun Hussein, who spoke in Yoruba, told our correspondent that such incident was strange in the area.


“This occurrence is very strange in our area. It is unfortunate that someone would conceive such evil. The river, where the rapist hid, is very popular. We usually wash and bathe there. The river is also believed to have power to cure sicknesses.

“The advice I have for parents is to take more care of their children, and anyone found committing such tragic act should also be ready to face terrible consequences.”

Efforts by PUNCH Metro to speak with Sofiatu’s parents were not successful as of the time of the report, as they were said to have moved out of the area.

Our correspondent gathered that Sofiatu was buried the following day after the incident according to the Islamic rites.

The Ogun State Police Public Relations Officer, DSP Muyiwa Adejobi, confirmed the incident. He added that the police had charged the suspect to court.


“The suspect has been transferred from Owode to the state police headquarters, Eleweran. We have also charged him to court.

“But the mother of the victim has come to the police to say she is no longer interested in pursuing the matter. We are going to minute her stand to the Commissioner of Police to await further directives.”