US Rapper Known as Chinx Shot Dead while Stopped at Light in Queens, New York


Onlookers on Sunday at Queens Boulevard and 84th Drive, where Lionel Pickens, a rapper whose stage name is Chinx, and a friend were shot in Mr. Pickens’s silver Porsche that morning. Credit Bryan R. Smith for The New York Times

Not long after finishing a performance in Brooklyn, Lionel Pickens, a local rapper better known by his stage name Chinx, headed back to Queens with a friend. It was early Sunday and they drove to a hookah bar, but finding it closed, they decided to call it a night.

As Mr. Pickens idled at a red light in his silver, late-model Porsche on Queens Boulevard, another car pulled alongside. Without warning, shots began crashing through the half-open driver’s side window at close enough range that detectives later found a 9-millimeter shell casing inside the Porsche on the front seat.


Mr. Pickens, 31, was struck at least eight times — and possibly many more — before he managed to pull his car to the curb in front of a Dunkin’ Donuts as the other car sped away. Taken to Jamaica Hospital Medical Center, Mr. Pickens died. His friend, Antar Alziadi, 27, survived. The police said he was in stable condition Sunday afternoon with two bullet wounds to the back and a punctured lung.

By late Sunday, no arrests had been made, the police said, and detectives were still searching for video of the killing and the car used by the assailants. 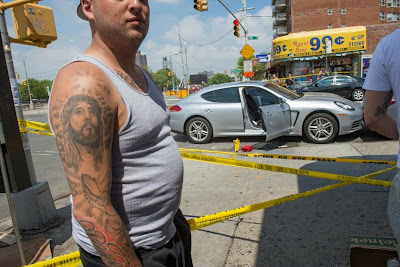 The fatal shooting sent a tremor through the hip-hop community in New York City and beyond. Mr. Pickens, a frequent collaborator with better-known rappers like Meek Mill and French Montana, earned fame through his mix tapes and performances with other rappers but never broke through with a national audience. He was working toward his first official solo album.

Mr. Pickens came up as a musician under the rapper Stack Bundles, who was killed in a 2007 shooting at the age of 24. Among Mr. Pickens’s most popular songs was a collaboration with French Montana titled “I’m a Coke Boy.”

Mr. Pickens grew up in Far Rockaway, Queens, in what was then the Edgemere public housing project but is now known as Ocean Bay Apartments. On Sunday, residents there shared news and memories as they lamented how another artist from the neighborhood embarked on a seemingly promising music career only to be shot dead in the street.
“The only way out of Far Rockaway is either death or jail,” said one resident, who gave his name only as Rich.

“There are no success stories out here,” said another resident, who gave his name as Chris. “You’re killed when you get successful.”

In the mid-2000s, Mr. Pickens spent several years in prison for robbery and drug sales.

They were heading west along Queens Boulevard through Briarwood in the four-door Porsche when they hit a red light at 84th Drive, the police said. The gunfire erupted just after 4 a.m.

The police said Mr. Pickens appeared to have 15 bullet wounds, mostly in his lower body, though some may have been exit wounds. Two 9-millimeter shell casings were found in the street and one inside the Porsche, on Mr. Pickens’s seat, the police said.

Raymond Rivera, 19, said he was walking with friends down 84th Drive when they heard the sound of gunfire and glass shattering. He said he saw a black Mercedes sedan swing into a fast U-turn and race away from the scene on Queens Boulevard.

By daybreak, seven bullet holes were visible in the two windows on the driver’s side of Mr. Pickens’s car, its engine still running. A red hat sat on the passenger’s side, blood stains visible on the sidewalk next to it.

By the Dunkin’ Donuts on Queens Boulevard, a small shrine took shape, one of the candles marked with the victim’s name: “R.I.P. Chinx.”

Outside Mr. Pickens’s home in Ozone Park, a few dozen people gathered on the steps on Sunday afternoon. “Right now, the wounds are still fresh,” a person said from behind a closed gate. “We’re just asking for some space to mourn this loss.”

In a past interview with Hot 97, Mr. Pickens talked about explaining the violent imagery of his lyrics to his two young children, a boy and a girl. “What dad’s doing is nothing different than what you see in the movies,” he said. “This is a movie with no picture. I’m just talking about it. This is not real.”