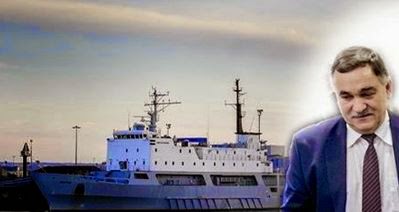 Norwegian Defence Chief, Haakon Bruun-Hansen, an admiral, has apologised to the country’s lawmakers for the sale of a fleet of a naval battleships and combat boats to a former Niger Delta militant leader, Government Ekpemupolo, also known as Tompolo.

He was the leader of one of the militias in the Niger Delta that led a devastating campaign of violence against the Nigerian state for years until he was awarded a multi-billion pipeline protection contract by the out-going Goodluck Jonathan administration as part of an amnesty deal with militants.

After surrendering "some" of his arms, Tompolo used the cover of the Nigerian Presidency to buy at least six decommissioned battleships.

But now that General Muhammadu Buhari has defeat Goodluck Jonathan, there is trouble.

A Norwegian newspaper, Daglabet, made the discovery. Among them were six fast-speed Hauk-class guided missile boats, now re-armed with new weapons.

The most recent hardware was the KNM Horten, a fast-attack craft allegedly used for anti-piracy patrol in the Nigerian waters.

Daglabet reported that the sale was implemented through a shell maritime Security Company based in the United Kingdom, CAS Global.

CAS Global was used to evade a requirement by Norway that arms dealers obtain export license from their country’s foreign affairs ministry, the report adds.

After the deal became public in December, the Director General of NIMASA, Patrick Ziakede Akpobolokemi, claimed the vessels were purchased as part of a Public Private Partnership (PPP) arrangement in conjunction with the Nigerian Navy.

The Norwegian government also, at the time, defended the transaction, according to Daglabet newspaper, saying the export “followed correct procedure and terms of export...”

But the report that Norway sold such military hardware to an individual with a history of violence angered the country’s lawmakers and triggered an investigation leading to the arrest of three Norwegian civil servants, now being charged for corruption.

Speaking during a parliamentary disciplinary committee enquiry into the sale of the battleships, the defence chief, Mr. Bruun-Hansen, has now admitted that military officials did not do proper due diligence before selling the decommissioned ships to Tompolo.

“The fact that the vessels have landed in Nigeria under Nigerian flag reflects a breakdown in our systems, and I apologize for that,” Mr. Bruun-Hansen said during the hearing on Thursday.

“Does this mean that anybody can buy these boats, as long as they sign a declaration?” asked an irate Member of Parliament, Erik Skutle. “Even terrorists? How on earth could this happen?” he added.