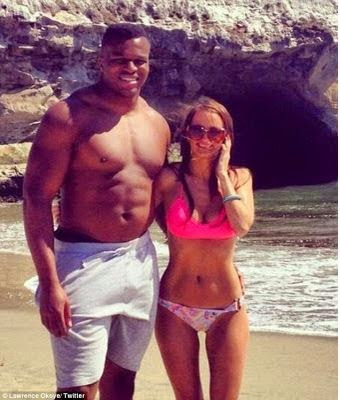 27 year old British citizen, Phillipa Okoye who is married to Lawrence Okoye, a British Olympic discus thrower and defensive end for the San Francisco 49ers is suing the investment firm she worked for, deVere Group for being demoted and then fired from her job as a senior investment adviser after she complained about the racist and sexual harassment at the firm.

Mrs Okoye alleges that one co-worker told her: 'I think it’s disgusting when white women go out with black guys.

She said one time, her boss asked her "How many cheerleaders has your boyfriend f–ked today?” He’s probably f–ked the whole cheerleading squad by now.’’

Philippa says she was the only woman in the Midtown office when she was hired as a senior investment adviser in October 2013.

Surrounded by about 21 male co-workers, she was exposed to sexist antics the first day, she said.

“So can you handle the banter or are you going to be a woman about it and be sensitive?’’ An executive at the firm Benjamin Alderson snipped, she said. 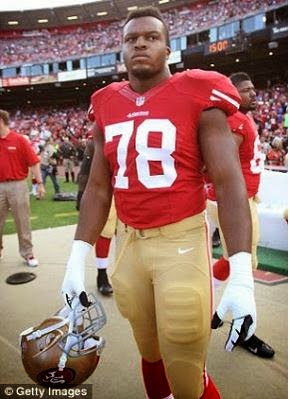 In her lawsuit, Phillipa said when she was still engaged to Lawrence, another co worker said, “Don’t change your surname to Okoye if you marry Lawrence, because people will think you’re black,’’ she said.

“Yeah, and that’s not good for business,’’ Alders allegedly added.

When other women visited, the men would rate whether they were worth “f–king,’’ Philippa said.

Philippa said that when she complained to Alderson, he seethed, “This is why I didn’t want women in the office.’’

Philippa says she was demoted and fired. She is suing for damages.

“While the suit can’t repair the emotional distress our client had and continues to experience, the employer must be held accountable for their unlawful actions,” said her lawyer, Kenneth Katz.

The taunts didn't stop at racism, either, Mrs Okoye says. She alleges that Alderson, a senior area manager for deVere, openly made it known that he wanted to pattern his office after 'Wolf of Wall Street' and 'Boiler Room.

DeVere Group are denying the charges, calling Mrs Okoye a disgruntled ex-employee who was fired for legitimate reasons.

'These false and incredulous allegations made by a disgruntled former employee are vigorously and categorically denied,' the company said in a statement.

'We are shocked and dismayed that a legitimate employment termination has sparked such a malicious response.'