Woman narrates how she escaped ritual killers in Ogun [PHOTO] 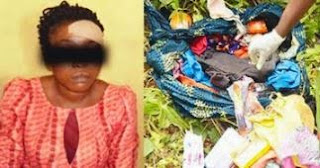 The latest discovery was made possible by the escape of a 28-year-old lady, who had been kept in an uncompleted building in the estate, bound hands and feet.

The lady was said to have been abducted, blindfolded, gagged and dumped in the den. She was reportedly told by her captors that they would come for her in the night on Wednesday.

But she was said to have struggled to free herself and rolled towards the entrance of the building.

It was learnt that some passersby in the area saw her and came to her rescue.Policemen from the Itele Police Station, who were later invited to the scene, were said to have cordoned off the area.

When the policemen combed the surroundings of the uncompleted building, decomposing bodies of two female victims were said to have been found.Suspected bones of other victims also littered the place.

The lady told PUNCH Metro that she had met one of her captors two weeks before the incident, and they started a relationship.

She explained that the man called her on Monday that he had secured a contract of N1.5m for her at a site in the estate. She added that the man told her that she would supply bags of cement worth that amount.

The victim said on getting to the site, the lover, was joined by another person, who abducted her.


“I met one of the ritual killers about two weeks ago and we started a relationship. The guy told me that he was a contractor and promised to link me up with people who would give me juicy contracts.

“The man called me two days ago and told me about a contract worth about N1.5m, but I could not meet him because I was sick. The man later came to my residence in Lagos and still persuaded me to come for the deal.

“On getting to the Unity and Peace Estate, we headed for an uncompleted building. One other person joined us. When we got to the building, I saw that the house had been plastered and the floor had been cemented.

“But both of them pounced on me, beat me up and attempted to rape me. I was having my monthly flow and that dissuaded them.They then tied my hands and legs, blindfolded and gagged me. They promised to come back at night to complete their assignment. It was a miracle that passers-by rescued me.”

Some residents of the community, who spoke with journalists, said they were startled at the discovery.

Some of them claimed that they always smelt some unpleasant odour from the area, but believed it emanated from a poultry farm nearby.

It was gathered that the policemen had arrested the owner of the building, while the suspected ritual killers had fled.

He said two decomposing bodies and some human skeletons were recovered from the scene.


“The command has taken over the building and our men will take some samples from the scene for forensic analysis to assist in investigation.”