Home Gossip News $1b NASS income is crime against Humanity: We March Today For Our Freedom

$1b NASS income is crime against Humanity: We March Today For Our Freedom 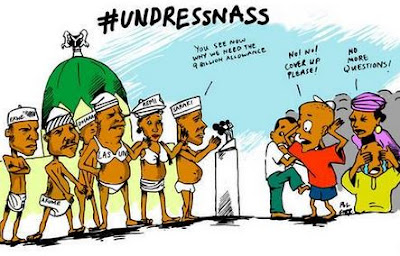 A group of 469 legislators, better addressed as legislooters have decided to take almost a billion US dollars as their annual income, while the rest of us Nigerians masses live in squalor. This is why I protest. Because of this shameless daylight robbery, I will be civilly disobedient.


sponsored post
Each of these men with basic-nil qualifications and who barely get their job done and when they do, are the kakistocracy that kills my people, have decided to consume $2 million dollars every year while 100 million Nigerians live under a-dollar-a-day. This is why we must march.

I am marching today because of all the old people who cannot march and ask themselves why they continue to live without water, without power, without security and all essentials of basic living in a nation endowed with human and natural resource. I march for the sick, I march for the victims of terror that our assemblymen have directly and indirectly promoted the deaths of with their lavish lifestyle of pump and splendour on the money meant for provision of amenities.

I march today because the billion dollars these 469 lazy men have decided to budget for themselves belongs to the mothers of Chibok.

I march today because whereas, we masses donate and try our best to support the victims of the terror caused by these very assemblymen, these greedy vultures swallow $ 2 million apiece/year and yet fail to be seen donating and trying to rehabilitate the orphans of the terror they finance.

I march because the billion dollars a handful of men who cannot and did not impeach past leaderships who promoted corruption and terror on the land, belongs to the Nigerian soldiers and Civilian-JTF, dying fighting to clear up the mess of our greedy politicians.

I march today and tomorrow because these vultures who believe they, being at the helm of power, can decide to cut up the biggest portions of the nation’s common wealth have thereby lost their legitimacy and must be indicted for public theft as are petty criminals.

I march today to create awareness and trigger successful movements across the country to recall these shameless NASS men via our #PowerOfRecall.

I march today, tomorrow and the days after because there can be no change with these 469 thieves of Ali Baba in our chambers. And we the cheated multitude shall #UndressNASS

I march today because the usurping of this large portion of Nigeria’s income, in this time of gross poverty, starvation, suffering and death amounts to Crimes Against Humanity.

Dr. Peregrino Brimah
http://ENDS.ng [Every Nigerian Do Something]
Twitter: @EveryNigerian