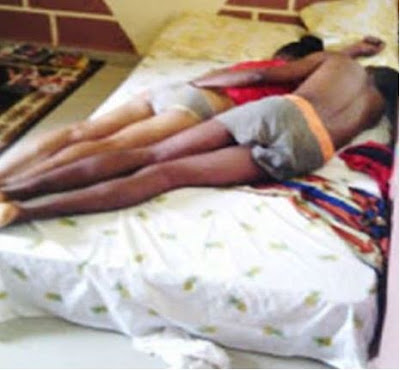 Two students of a University in Anambra State were found dead in a hostel room located near their school, according to a report by Daily Independent. (the late lovers pictured pictured above)

The female student is from Imo State. She visited her boy friend and they went in together on Saturday but never woke up until their doors were forced open by the police after a neighbor raised the alarm. The male student was 300level student of public administration. They allegedly died after sex romp and their neighbors never knew until their bodies started decomposing.

The guy allegedly drugged the girl to have access to free sex which resulted to her death and he equally took the pills and lay beside her.

Special Anti Robbery Squad (SARS) from Awkuzu removed both bodies and deposited then at an undisclosed morgue.

The Police Public Relation Officer (PPRO), DSP Uche Ezeh while reacting to the incident said investigations were ongoing to ascertain the veracity of the case but confirmed the incident while charting with Daily Independent Metro.