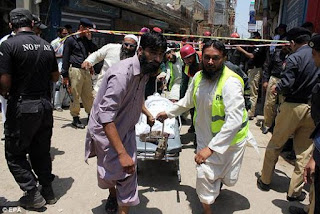 In a twist of fate,two would-be suicide bombers died in Pakistan after an explosive device detonated, causing an explosion as they fought each other.

According to Eyewitnesses the men,wearing suicide vests, were sitting on a bench engaged in a heated discussion before their deaths.The two men then began to fight ,triggering an improvised explosive device.
sponsored post

According to ARY News,police officer ,Sargodha Saqib Manan suggested divine intervention may have saved the city from a big loss.

After cordoning off the area, the men's bodies were taken to Sargodha’s District Headquarters Hospital and their homes raided,resulting in the arrest of several suspects.