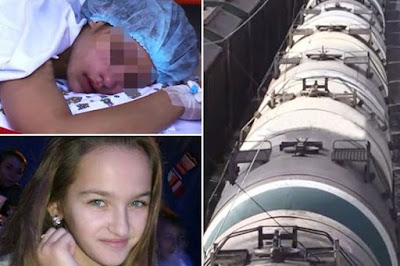 According to Uk Mirror, Russian pals Olesya Belmasova and Anastasiya Kirillova, who are both 16, suffered horrific burns after brushing against a live rail track in the Russian city of Taganrog.

The pair tried to clamber on to the top of the tank car of an old train, thinking it was no longer in use.

But the train was sat on tracks with thousands of volts running through them.

The unlucky friends were spotted by a passing worker, who witnessed the horrifying moment they were electrocuted.He said

"I was walking towards them to ask them what they were doing when they were suddenly blasted to the ground," he said.One was completely blackened and the other was on fire as if she had exploded."

The two girls were rushed to a children's hospital with 70% burns and several fractures.

Anastasia, who can still talk despite the severity of her injuries, said:

"We climbed on top of the tank car and then I heard a loud clap. We fell off the car and onto the ground."My hair was on fire and I was in so much pain."