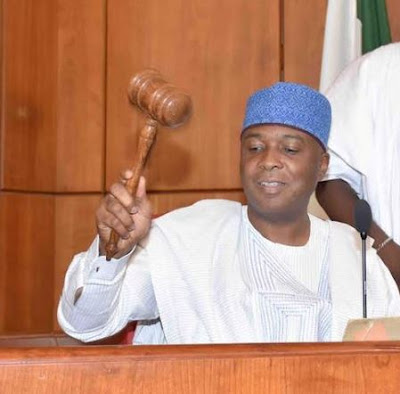 A storm is brewing in the Senate as Members of the Barnabas Gemade -led Senate Unity Forum walked out of the Senate Chambers,threatening to take a legal action against the emergence of Bukola Saraki on Tuesday as the President of the Senate.

Addressing journalists at a news conference in Abuja on Wednesday,they insisted Saraki's election was not constitutional.

Punch reports that, the problem started when Gemade, a former Peoples Democratic Party national chairman, raised a motion in the house,demanding full integration of the SUF members who were absent from the formal inauguration on Tuesday.The motion was overruled by Saraki..Gemade said..

“I will like to appeal to the President of the Senate that driving for a united Senate, it would be reasonable to accommodate everyone. But if the desire is not to accommodate all, then you are heading for a divided Senate.

“That would not be good for your leadership, for the senate as a whole body, and it will also not be good for the nation. It behoves on you, Mr. President, that due recognition must be given to all concerned.”

Marafa, who raised a point of order protesting the way and manner Saraki emerged as the Senate president, demanded full investigation.His motion was also overruled by Saraki.

“The news was that the Senate was inaugurated with 57 senators while 51 senators- elect were absent.

“The news portrayed me and many of my colleagues as irresponsible members of this hallowed chamber. That we were absent from an event that was announced and which we were to attend with our spouses and well wishers, showed us as irresponsible people.

“That caused unwarranted embarrassment to me and other members of this Senate and our family members. I want to put it on record that after the swearing in today (Wednesday), I was handed down Senate standing orders as amended.

“I want to say that as an active member of the former Seventh Senate, I cannot recall where and when the Senate orders were amended or tabled for any amendment or corrections. I think it is worthy of notice that this act was perpetrated and the Senate should call for a full investigation of what happened and where this document emanated.”

After they were overruled, the 28 senators, including the APC choice candidate for the Senate Presidency, Ahmed Lawan, went to address journalists. They did not return until the session rose.

Gemade,who spoke for the forum, said that 51 senators were denied the right to take part in the election of Saraki because they were at the International Conference Centre in Abuja for a scheduled meeting with President Muhammadu Buhari.

He said the group had resolved to challenge the “ illegality” in court “since it takes two-third of members to impeach the Senate President, two third of the members should also, have been in attendance before he(Saraki) was elected on Tuesday”

“Our right to participate in the election of the Senate President is a constitutional right which cannot be taken by any person or group of persons.

“The Clerk of the National Assembly (Salisu Maikasuwa), knowing full well that the quorum for election of the Senate President was not met, went ahead to conduct an election that shut the door against about 51 other senators. This will remain unacceptable until what would meet democratic parameters is done.

“The insinuations in some quarters that we boycotted the election is totally unfounded. As loyal party members, we would take all necessary political and legal means to strengthen our democracy and democratic process in line with the change that we promised our teeming supporters during our electioneering.”

Gemade insisted that the election of Saraki was null and void because “a quorum was not formed , which should be two-third of the senators present.”

“53 senators were out and the remaining 56 were not enough to elect the President of the Senate. That is a clear position that we take. We are not considering the attendance of that day to connote the quorum in the Senate because many Senators came there after the event was done.”