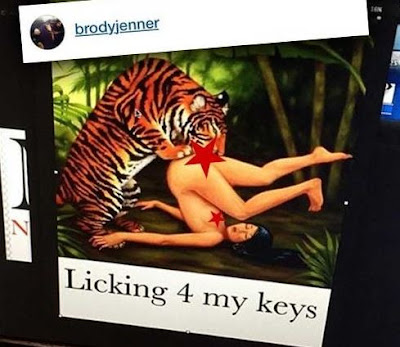 17year old Kylie Jenner has 3 big brothers but it doesn't really seem like it because everyone is sitting quietly as she dates a rapper way older than her. But one of her big brothers, Brody Jenner kinda made his feelings about the relationship known on instagram today. He shared the pic above, which he has since taken down, which shows a young woman with dark hair like Kylie being molested by a tiger. See how TMZ is reporting it after the cut...

Brody Jenner used a porntastic image to send a message to Tyga -- quit banging my 17-YEAR-OLD sister, Kylie Jenner -- or so it appeared.


Brody posted the illustration this morning ... of a tiger in the jungle licking the lady parts of a young woman with dark hair, who looks a lot like Kylie. The post includes the caption, "Licking 4 my keys."
Most people assumed he was making some kind of commentary on Tyga and Kylie's relationship -- but Brody's GF, Kaitlynn Carter, tells TMZ it was an innocent coincidence.
Kaitlynn says Brody's friend has a t-shirt company and they were just looking for Internet memes to use on gear. She says Brody's pal made up the "keys" caption, and the guys thought it was hysterical ... but it had nothing to do with Kylie's dating sitch.

As for why the post came down after a couple of hours -- Kaitlyn says she told Brody it wasn't funny ... so he deleted it.