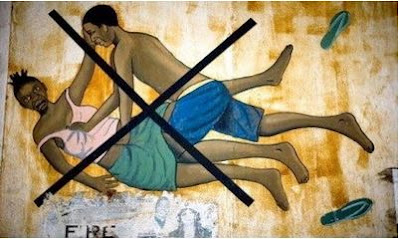 The Lagos State Police Command has arraigned a 52-year-old school teacher, Isaac Ikiabeke, for allegedly raping a 5-year-old pupil in the Ikorodu area.

Ikiabeke, who is the proprietor of the school, Brighter Glory School, located on Etunrere Street, raped his victim after school hours.

The victim, five-year-old Pat (not her real name), said Ikiabeke had allegedly raped her 10 times.

“He has been doing it for some time. He has done it more than 10 times. I am not the only one. He does it with some of us after school hours. I could not tell anybody because he said if I did he would beat me.”

The victim’s grandfather explained that his attention was drawn to the sexual assault by some of Pat’s classmates.

He said he was shocked, as well as disappointed in Ikiabeke, whom he regarded as a respectable man.

“Pat and her younger sister stay with me and they attend the school. I never suspected anything initially, except that I observed she would be holding her belly and turning on the bed and when I asked her what happened, she would say she was having stomachache.

“It was one of her classmates that told me what the school owner had been doing to her and I quickly went to report at the station, after which he was arrested.”

The matter has since been brought to the attention of the Lagos State Office of the Public Defender.

A police source said that they got complaints from two victims.

He said a three-year-old pupil, who was equally raped by the suspect, was in a critical condition in a hospital.

“There were actually two pupils that we were told he raped. The atrocity had been going on for a long time before he was arrested.”

Pat has since been taken to the hospital for treatment.

The police on Monday arraigned Ikiabeke before a Yaba Chief Magistrates’ Court on one count of unlawful sexual intercourse.

“That you, Isaac Ikiabeke, on June 9, 2015, at about 3pm, at Brighter Glory School, Etunrere Street, Ikorodu, Lagos, in the Lagos Magisterial District, did have unlawful sexual intercourse with a minor, (name withheld) aged five years and thereby committed an offence punishable under Section 258 (1) of the Criminal Law of Lagos State, Nigeria, 2011.”

The defendant pleaded not guilty to the charge and elected summary trial.