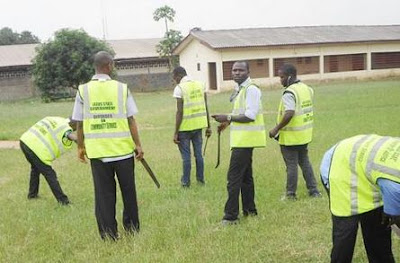 Seven Lagosians who were caught plying BRT lanes ,were ordered to cut grass on the football field of the Ministry of Youth and Social Development remand home, Oregun .

The defaulters were arraigned at the Special Offences Court at Alausa, Ikeja , and were sentenced to one hour community service in addition to payment of traffic fine..They are :

They were apprehended on Tuesday, 21st of April, 2014 inside the BRT corridor at Anthony area of Lagos State by LASTMA officials around 9am.

They all pleaded guilty to the count charge of BRT violation and admitted they regularly plyed the BRT lanes in order to meet deadlines or beat traffic gridlocks . Kimi Egbekun however maintained that he was caught on his first attempt.

The offenders while showing remorse for their actions,said they were humbled by the punishment and urgedother motorists to avoid the use of the corridor or face the wrath of law.