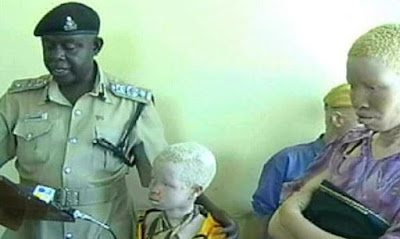 This little albino girl own uncle tried to sell her to a witch doctor for thousands of dollars so she could be hacked to death and her body parts used to make a potion to bring the rich and powerful luck.

Margareth Khamis was snatched from the home she shares with her mother and three siblings in northern Tanzania by a masked gang in the middle of the night last week.

Mailonline reports that ,the kidnapping sparked a frantic search by the villagers, who tried to follow the gang through the bush without luck.

But unlike many other children with ablinism, luck was on the six-year-old's side: local police heard a man was looking to sell a little girl for an undisclosed sum which could have run into the tens of thousands. Had he been successful, it is likely Margareth would not have been seen again.

Instead, the police set up a sting, and pretended to be a potential customer.

'After we had received the information our officers immediately put our trap and were able to arrest the man red-handed.'

Shockingly, the man they arrested was Margareth's 44-year-old uncle. Thankfully, she was unharmed and was quickly reunited with her family.

Margareth's mother Joyce Mwandu, who also has albinism, was relieved to have her young daughter back.