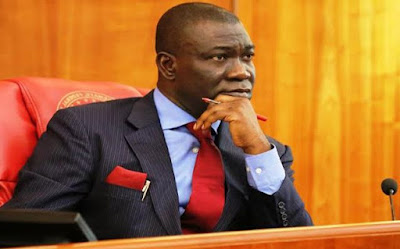 A member of the ruling party who spoke on condition of anonymity with Punch, said Ekweremadu serving as deputy senate president will adversely affect President Buhari's administration.

He also added that President Buhari has refused to see Senator Saraki and Hon Dogara since their emergence as Senate President and Speaker.

"As deputy senate leader, Ekweremadu is automatically the Chairman, Senate Committee on Constitution Amendment. This is a sensitive position that, statutorily, should not be held by the minority. Ekweremadu and his PDP co-travellers will hamper the policies of the Buhari government. By the virtue of Senate rules, a member of the minority is not supposed to be the deputy senate leader; so, he is occupying the post illegally. We know the body language of some of these elements to anti-corruption. Nigerians know the stance of Buhari on corruption and insecurity. These elements occupying positions in the National Assembly must be removed. Otherwise, this administration is dead on arrival. The President has refused to see Saraki and Dogara since they emerged as senate president and speaker respectively. Both Saraki and Dogara have done everything possible to see the President but he has shunned them because he is not happy about their conduct. You can see that the President has seen the Lawan group; this shows where his support lies” he said