Home Gossip News APC May Not Retain Power in 2019 - Akande 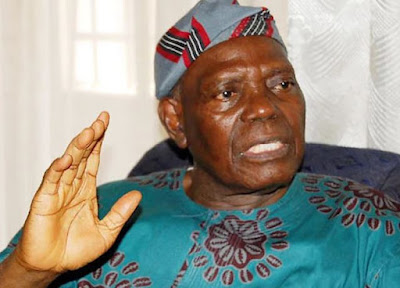 Bisi Akande, former interim national chairman of the All Progressives Congress (APC) has called on President Muhammadu Buhari and governors on the platform of the party to intervene in the continued crisis within the  party before it collapses.

Akande said that  the ongoing crisis if not tackle headlong may affect the party chances of retaining power in 2019. He made this known in a statement released to journalists on Sunday.

He said: “Now that the whole conspiracy has blown open, it is doubtful if the present institutions of party leadership can muster the required capacity to arrest the drift.

“It is my opinion that President Buhari, and the APC governors should now see the APC as a rocking platform that may not be strong enough again to carry them to political victory in 2019 and they should quickly begin a joint damage control effort to reconstruct the party in its claim to bring about the promised change before the party’s shortcomings begin to aggravate the challenges of governance in their hands”.

While condemning the crisis in the National Assembly, Akande  stated: “numerous among those calling themselves businessmen in Nigeria are like leeches sucking from the nation’s blood largely through various governments and particularly through the Nigerian Federal Government.

“While all these schisms were going on in the APC, those who were jittery of Buhari’s constant threat of anti-corruption’s battle began to encourage and finance rebellions against the APC democratic positions which led to the emergence of Senator Bukola Saraki as the candidate of the PDP tendencies inside and outside the APC”.

The APC chieftain  further noted: “With the air of oneness, APC went ahead to conduct primaries to select candidates for state governors and Houses of Assembly and for the Presidency and the National Assembly.

“After the elections which saw APC to victory all round, a meeting was reported to have been held by certain old new-PDP leaders in a Peoples Democratic Party (chieftain’s house) in Abuja to review what should be their share in this new Buhari’s government and resolved to seek collaboration with the PDP with a view to hijacking the National Assembly and, having got rid of Goodluck Jonathan, with an ultimate aim of resuscitating the PDP as their future political platform”.

Akande explained: “Unknown to most APC members, while Senator Bukola Saraki was being adopted as the candidate for Senate President by certain old new-PDP tendencies, the theory was being propagated that, like in most presidential democracy, the APC minority leaders in the old National Assembly (i.e George Akume for the Senate and Femi Gbajabiamila for the House of Representatives) should automatically become Senate President and Speaker respectively now that the APC has the majority.

“Certain leaders felt that most past Senate Presidents had come from Benue State which Akume represented and that Benue State should be made to assume the traditional home of all senate presidents. At the same time, certain senators were clamouring for one of the most ranking senators anywhere outside the North-west zone that produced the President. That was how Ahmed Lawan who had been in the House of Representatives for eight years and in the Senate for another eight years emerged as the candidate for the senate president”.