At no point did I steal from Nigeria - Dieziani Alison-Madueke 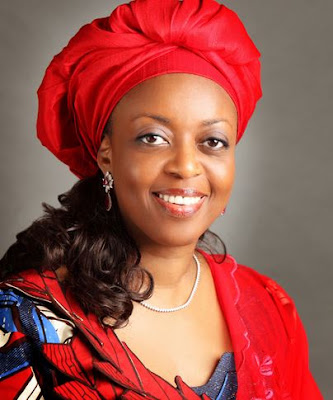 In a fresh interview with ThisDay, immediate past Minister of Petroleum Resources, Dieziani Alison Madueke reacted to all the allegations of corruptions leveled against her while she served as Minister. Alison-Madueke said contrary to reports, she never stole from the Nigerian state. She said she worked for the betterment of Nigeria while she was Minister and sacrificed her time to ensure the petroleum sector was developed.

In the interview, Alison-Madueke acknowledged that she and her team might have made mistakes.

The former Minister addressed allegations made against her by Emir of Kano and former CBN governor, Sanusi Muhammad 1st, that she disobeyed the directive of former President Umar Yar'Adua to stop the subsidy plan on Kerosine.

"Let me just make this very clear to Nigeria as a whole because this is an area of great pain for me. That Sanusi should say I sustained the subsidy is not true, when very clearly in 2009, the late President Yar’Adua gave a written directive to the late Minister of Petroleum Resources Alhaji Rilwan Lukman that he should remove the subsidy on DPK. This subsidy on DPK was never removed by the late Minister of Petroleum Resources, whom I considered to be somebody that I regarded almost as a mentor. For reasons best known to late Alhaji Rilwan Lukman and the then economic team, the Finance Minister and others, they never implemented the directive to remove the subsidy. By law and the Petroleum Act, you must gazette such a removal for it to become law and of course it has to be published so that Nigerians would know that there has been a change in the price of the petroleum product. It is illegal to do it or to say you have done it, if you have not gazetted it. Even before that, former President Goodluck Jonathan who was the vice-president at that time, had also clarified, even in a public media broadcast and in person as well, that the subsidy was never removed. So I sought clarification from him and he also made the clarification clear in a public media broadcast about a year and a half ago, that the subsidy was never removed. So at no time did I go against a president’s directive. It is not possible that I would have come in as a Minister of Petroleum in 2010 and found that kerosene subsidy no longer existed and that it had been gazetted and I would have suddenly upturned it. Government is a continuum and so it was not possible that I could have done that. So I feel very pained that Sanusi would make it sound like I was the one who went against late President Yar’Adua’s directive. I think this should clarify this issue once and for all. It’s high time Nigerians got some insight into your personality, because there were lots of complaints that you are aloof, inaccessible and some even alleged that you were an absentee minister who spent more time at home than in the office"she said.

"Well, I don’t know whether that issue is still in court. But the reason that I went to court was simple. First of all, nobody can lease a jet for N10 billion over a period. You can buy three jets for N10 billion. So that was obviously a nonsensical argument and I did not lease any jet. The NNPC leases jets and NNPC leased those jets to the best of my knowledge because at that point in time, they had no official planes. As an oil and gas ministry, we have purview over everything and it was actually very wrong that we had to borrow planes from these multinationals whom we were supposed to oversight. So over the years, I am talking about over the last 15 or 20 years, NNPC had either owned, leased or borrowed, both jets and helicopters. That was the case when I came in.

Yes, we had a very old jet which nobody was going to touch and another jet had just been bought by late Alhaji Lukman just before he left, a Hawker. Unfortunately, the moment it came, because it had been sitting unused for over a year it became a problem. In fact, NNPC was advised to sell it because it was a problematic model and had sat unused for a long period. They were advised to sell it, but they didn’t sell it. Then after a year of its purchase, it crash-landed in Nsubi and we had to actually give it out for spare parts to the National Security Adviser’s office at the end of the day. It was during this period that they leased the private jets for executive movement and operations in general, which we also used, as had always been the case. In that respect, the reason for the leasing and the amount involved are all available and I am sure the NNPC would be willing to give that information to whoever wants to look at them for public records. So again, it was a fabrication that came out from nowhere and was thrown at us as if suddenly out of the blues and for the first time in history, the NNPC was leasing jets or helicopters".

The Former Minister stated that the jet was never for personal use "No it was not for my personal use, it was for executive movement, which is has always been the case. I am saying just like the $20 billion, you find something, you throw it on the person to feel smart or to make it look as if the person is junketing all over the place or as if nobody had done that before in the annals of the NNPC. Of course we were not junketing all over the place. To be very honest, if they had never done that contract to lease the jet, we would have been hiring at a higher cost and which probably would have caused less of an issue. But to be frank, the lease that was put in place, to the best of my knowledge, was done with a company which even Shell and others have been using. So there was a known company with a very good track record and was being used in the industry by other multinationals.

But the other issue that you raised in terms of the National Assembly was not even because of the plane. The reason the plane was used in the legal brief was because that was the topical issue at the time. It was because in that year, the Minister of Petroleum had been summoned to the National Assembly, according to my officers, almost 200 times. And at this point, it became apparent that we were not going to be able to work or to perform our duties as a government agency anymore. So it was now becoming a situation whereby every week, they summoned the Minister of Petroleum, one of the parastatals or NNPC, and it was now becoming virtually impossible to actually perform our duties as an MDA. As such, at that point, our lawyers just felt we needed to stop it because it was becoming extremely disruptive. That was the basis on which the legal action that was taken, just to allow us some space to continue working" she said.