Home Gossip News Bride shocks guests, shows up to her own wedding in a coffin [PHOTOS]

Bride shocks guests, shows up to her own wedding in a coffin [PHOTOS] 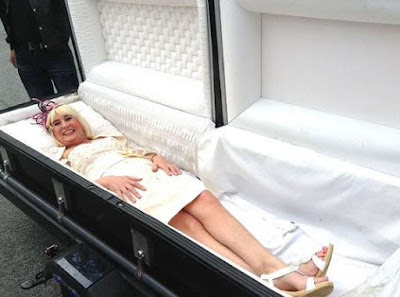 A 58-year-old bride, Jenny Buckleff shocked guests when she turned up at her own wedding in a coffin The bride, said:

'I just wanted to do something a little bit different! Instead of turning up in a horse-drawn cart, I thought I'm going to turn up in a coffin.I almost didn't tell Chris but in the end I spilled the beans about three weeks before.'He was a bit surprised but he said as long as I was happy he would go with the flow.What more could I ask for from a new husband?!'I don't normally dress like this and I'm not a goth at all.'I work for Bet365, so you have to be well presented and I'm normally very smart.'But my brother is different. He's covered in tattoos so for once he looked the part.'

Although the pair gave lots of wedding guests a shock, they said they were pleased to have had such a talking point at the nuptials.

The couple met just six months ago and Mr Lockett proposed one month later in their local pub, the Horn and Trumpet.

'She kept it from me for a bit, but then it slipped out. It was different, but if that's what she wants to do then that's fine.'When we first met in The Victoria on the Square in Hanley, I gave her my number. But I was so drunk, I gave her the wrong number and kept going back to the pub week after week, waiting for her to come back in.It was maybe four or five weeks until we met again and it went from there. It was love at first sight. I proposed around Christmas.

'I was out shopping for presents when I saw a jewellers and I thought, "Why not?" It wasn't planned.'

'The coffin was a bit strange, but my mum is never normal. I thought she was joking at first.'

The couple have five children from previous marriages, who were all there, alongside Mr Lockett's ex-wife, to watch them get married on Saturday. 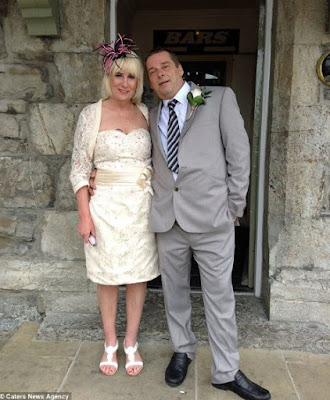 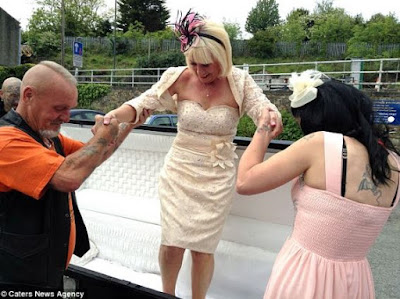 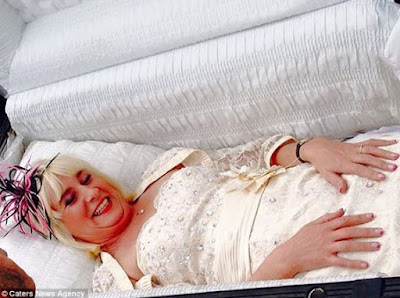 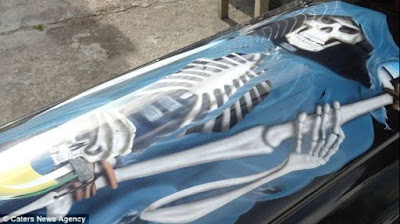