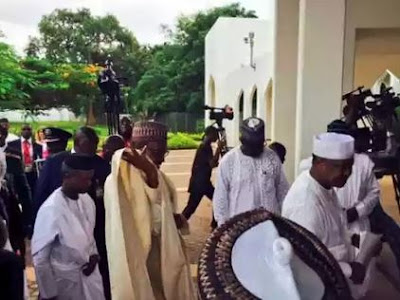 The inter agency rivalry between the Department of State Services and the Nigerian Army came to head on Wednesday as the Aide de Camp, ADC, to the President, Lt. Col. Abubakar Lawal ordered personnel of the DSS out of the presidential villa.

The incidence which happened at the residence of the President at the Presidential Villa was extended to all other points that had been manned by the personnel of the DSS.

It will be recalled that since assuming office as the President, there has been an intense rivalry between DSS personnel and the army over who is to provide close body security to President Buhari.

Some members of the armed forces were drafted from the Infantry Corps to the villa after the inauguration of President Buhari to man all the strategic points at the villa, a move that was resisted by the DSS personnel who had constitutionally provided close body protection to the President.

The issue, however, came to a head on Wednesday when the ADC to the president ordered members of the DSS at the Presidential Villa to hand over to men of the Nigerian Army.

The directive almost caused an altercation between Army and DSS, their chain of command is different.

It took the intervention of the Chief Security Officer who directed his men to “stand down,” a euphemism for complying with the directive of the ADC.

According to a soldier who was present at the incidence, “the ADC directed that they should hand over to us and leave the villa. We have now taken over fully as directed by the ADC and we are in charge.”