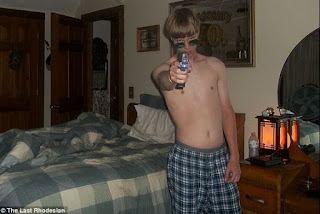 Funny how they are now trying to give excuses for murder. Dylann Roof's cousin claims the suspected killer became racist after a girl he liked started dating a black man.

The 21-year-old is charged with murdering nine African American churchgoers in a Charleston bible study group on Wednesday night. Since his arrest, it has emerged Roof harbored strong feelings against black people, had Confederate plates on his car, plotted to paint all Jews blue, and reportedly told friends that somebody needed to 'save the white race'. 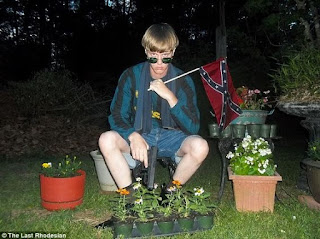 According to Scott Roof, his cousin, these feeling were vitalized when Dylann's love interest became involved with a black man. He told the Intercept

'He kind of went over the edge when a girl he liked starting dating a black guy two years back..'Dylann liked her. The black guy got her,' Scott said. 'He changed. I don’t know if we would be here if not...' he finished, before hanging up the phone on the reporter. 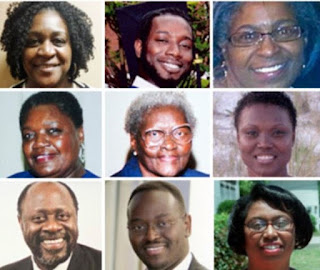 This comes after it emerged Dylann left a ranting, racist manifesto on the internet calling for a new civil war in America before staging his massacre.

I chose Charleston because it is most historic city in my state, and at one time had the highest ratio of blacks to Whites in the country.

'We have no skinheads, no real KKK, no one doing anything but talking on the internet. Well someone has to have the bravery to take it to the real world, and I guess that has to be me. 'N****rs are stupid and violent.... Black people view everything through a racial lense [sic].'

'Anyone who thinks that White and black people look as different as we do on the outside, but are somehow magically the same on the inside, is delusional..'How could our faces, skin, hair, and body structure all be different, but our brains be exactly the same? This is the nonsense we are led to believe.

'I have no choice. I am not in the position to, alone, go into the ghetto and fight.

'Unfortunately at the time of writing I am in a great hurry and some of my best thoughts, actually many of them have been to be left out and lost forever. 'But I believe enough great White minds are out there already. Please forgive any typos, I didnt [sic] have time to check it.'