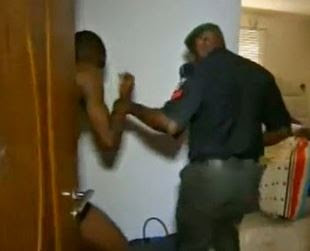 That a person is going to church and even becoming a worker in the same church does not mean he or she should be trusted blindly. The heart of humans are filled with wickedness, Christian or no Christian.

Who do we trust? A choirmaster, Adewale Babalola, who allegedly had unlawful carnal knowledge of a 16yrs old chorister in church, was on Thursday brought before a Yaba Chief Magistrates’ Court in Lagos.

The 36-year-old Choirmaster, who lives at No.11, Maxwell Ijeh St., Aguda, in the Surulere area of Lagos, is facing a charge of unlawful s*xual inter-course.

According to the prosecutor, ASP Godwin Anyanwu, the accused committed the offence on Dec. 2, 2014 at his apartment. He said the accused took undue advantage of his relationship with the teenager as her choirmaster at Christ Our Light Glory Church, Sanya in Surulere, to commit the crime.

“The girl told her father, who is also an evangelist in the church that the accused lured her into his room and forcefully had a carnal knowledge of her.

“The father reported the matter to the General Overseer of the church but no action was taken, which compelled the victim’s father to report the matter at the police station,” Anyanwu said.

The offence, Anyanwu noted, violated Section 137 of the Criminal Law of Lagos State, 2011.

When the charges were read to Babalola, he pleaded not guilty.

The Chief Magistrate, Mrs A.O. Soladoye, directed that the case file should be forwarded to the Director of Public Prosecutions (DPP) for legal advice.

The magistrate granted the accused bail in the sum of N200,000 with two sureties in like sum and adjourned the case to June 29.